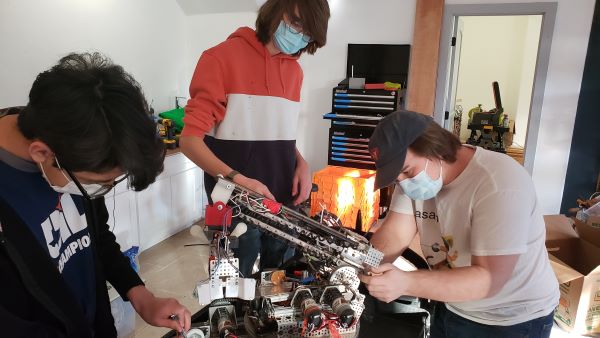 This season of FTC has been quite difficult for most teams in Texas. As a state with high rates of COVID-19, It has been quite tricky to pull a team together to come in person to build and code a robot. It's for this reason that strategically speaking, it makes the most sense for us to use our old robot from the FTC 2019-2020 Skystone competition as a starting point for this year’s robot. With plenty of modeling and virtual designing, we should be able to make a functional robot within a few months. I guess that's one of the silver linings of the pandemic, that we are forced to design in Fusion 360 before any build is done. For this year's competition, we also gain an advantage from TomBot's turret which is a refined piece of hardware that we developed over the course of last year and would have brought to worlds if we could have gone. However, even though, it's from a previous season, it can still be used to selectively target, pick up, and shoot rings this year. So it's for all of these reasons and more that we decided to start our robot from the disassembled remains of TomBot

The first thing we need to do in order to have a robot that is based on TomBot is disassemble TomBot. That is what we did today. The disassembly was easy. All we did was take some of the less important components off which basically boiled down to the extendable part of the arm and the platform grabber thing plus a few other servos and gismos that we don't need. However, we made sure that we kept a few things that could prove to be useful in the future. We made sure to keep the pivot of the old arm because we can use it as a strong pivot point for a disk shooter. We also kept the turret since we did spend a lot of time on it last year and the technology is very useful for aiming the shooter that we plan to build in the future. The vision is to have a robot that automatically targets and shoots at the high goal or the power shot; however, we are going to need a lot of development to get there.

This post is short because there isn't a lot to say on the topic of disabling TomBot but there is a lot to say about the future of this year's robot. We have struggled greatly just getting to practice but this one achievement shows that there is hope and a chance that we will be able to have a good robot this year. We have plans including a flywheel shooter, a belt intake, a ring elevator system, and code developments to make last year's robot work well for this year's challenge. Now we just have to build them. Our next steps are to continue to develop these systems and finish them to implement on the new robot.