New intake area is wider than before 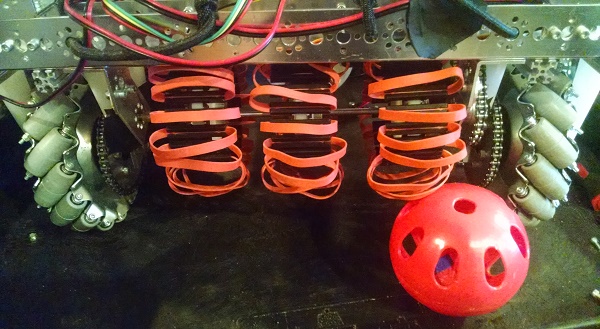 At the Scrimmage we noticed that the rubber bands would get tangled as they rubbed against the underside of the catapult bowl, and so didn't reach as far down at the bottom. We untangled them before each match but decided to test out the smaller ones when we had the chance at practice. We were planning on adding a wider area for intake with some circles of treads and rubber bands, but with the long rubber bands they just got completely tangled in each other. So this practice we replaced the long rubber bands with the shorter versions and looked at differences

It took a little while to physically pull out and replace each band, but the rubber bands we use are stiff enough that they can be pulled thin enough to slip in without getting twisted up. The single conveyor with the smaller rubber bands wasn't any noticeably worse than the same conveyor with longer ones, and our load rate stayed pretty much the same. We then added the smaller side brushes/spinners on that axle. Originally the longer rubber bands tangled up and threatened to break the belt, but this made it easier for Tycho and Omar to score. The added wheels on the axle make the intake area almost as large as the robot, stretching from wheel to wheel.