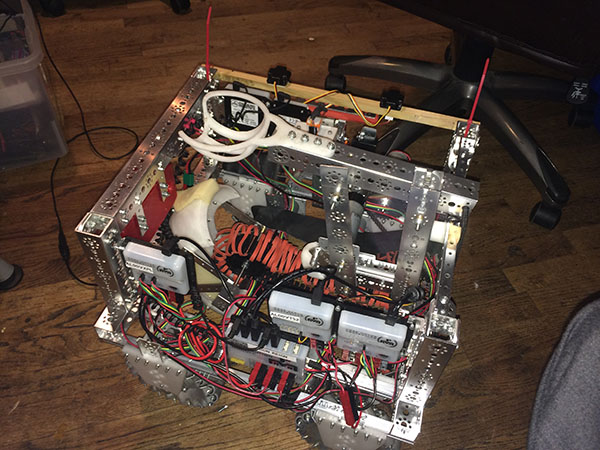 The wiring, which had been on the robot, had been a constant issue. The wiring tangled, interfered with the scoring mechanism, and led to some inefficiencies in electrical output. In order to increase the available space to reconfigure the inner workings of the robot, we built a second testrix layer, which also conveniently serves as a handle.

The new level on the robot has given us a lot of much-needed flexibility for arranging the different parts. Now the core of our robot isn't a jungle of tangled cords. As we continued building the layer, we found it could be used for various other purposes besides simply space control. The back layer simultaneously stabilizes our scoring mechanism, allowing us to control our shot more. Besides the modules, the phone and power switch are also attached to the upper layer for ease-of-access. As we only made layers for the front and back, the sides of the robot are left open, nonetheless more free without the wires, for our cap ball lift (which is currently in progress, more on it in future posts).