Task: Create a particle launcher with a higher scoring rate 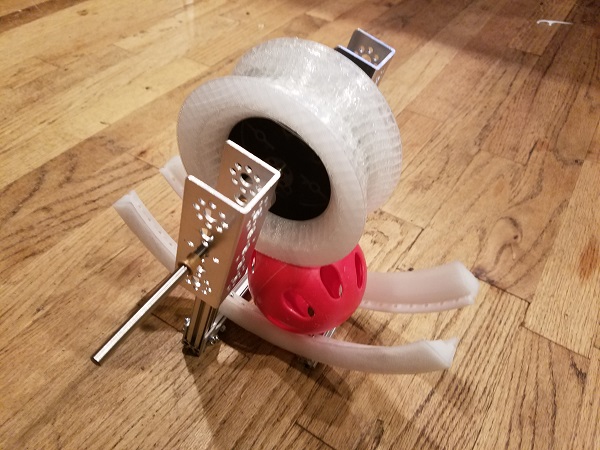 The first particle launcher we saw by another FTC team was actually a crude flywheel and rail design back in October where the rail was a cut up PVC elbow. Back then we considered a number of different designs including impact launchers, catapults, flywheel + rail systems and dual flywheel shooters like our sister team built. We decided to go with a catapult design because Max had experience with catapults and knew that they could create very repeatable trajectories.

Our catapult has achieved those reliable trajectories. We operated it with a choo-choo mechanism that allowed us to fire and re-cock without having to change direction, so that made reloading easier and faster that it might otherwise be. It accurately scored, with consistent ballistic trajectories, however, the system had problems with ball loading when our 3D printed catapult bowl kept failing due to layer separation. As a result we had a lot of misfires and had to replace our bowl often. So our moderate cycle rate and our misfires meant we actually scored only about 4 balls during our average teleop phase. As the season progressed it became increasingly clear that we would have to radically improve our center vortex game and that was driven home when Technical Difficulties and Technibots crushed us with their world record score in the finals match at our first qualfier.

So we decided to move on to a flywheel-based design, knowing that we would likely be sacrificing some accuracy for a much greater cycle rate. We knew that dual flywheels tended to have even greater issues with accuracy due to their extremely short contact period and the chance that one or both wheels would hit a slot in the wiffle ball. We saw direct proof of this as our sister team, Imperial Robotics, struggled to get their dual-flywheel design to work consistently. And Ethan had attempted to build one very early in the season, but never really go it working. So we decided to design with a single wheel with a semicircular ball guide or rail. Max created a custom 3D design for both the flywheel and for the rails. The rails were printed in nylon, our preferred structural plastic. He printed three different flywheels for testing. One was in nylon meant to be covered with foam for compliance. The other two were printed in Ninjaflex (urethane) at different infill densities. The foam on the nylon version shredded at the RPMs we were using. We probably could have found a better adhesion solution, but found that the low-density Ninjaflex version worked beautifully and has stood up to extensive testing. 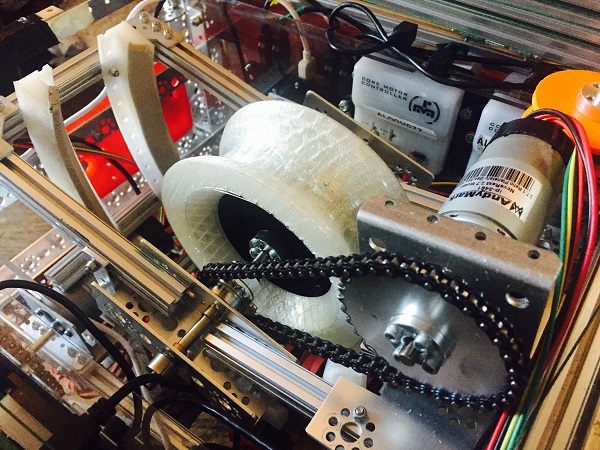 The continuous improvement of designs is a constant focus we adhere to. Previously we'd gone through two major revisions of our catapult system, with a whole bunch of minor modifications, and that system got us qualified for the North Texas Regionals. We saw the pros and cons, and eventually saw fit to change the system to score more points in the long run. We are now able to score around 75% of the balls we shoot. The key is in how quickly we shoot now. Before we would have to collect balls, turn the robot around, load a singular ball into the scoop, and shoot. Now, we can shoot 4-5 balls right after another without turning around. This will allow us a much greater center vortex scoring rate as we aim to be one of the top teams at Regionals.