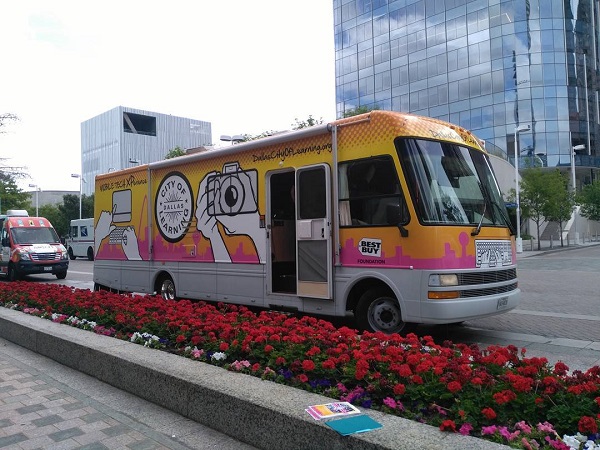 The Meyerson Symphony Center hosted a Microsoft YouthSpark event this Saturday with activities from robotics to VR to 3D printing. We set up the sumo laptops up in the atrium and the 3D in the MXP outside, right next to the Perot tech van. The tech van had most of their setup outside with a smaller piece inside, and we worked pretty well in tandem. (I have it on high authority from a random girl that walked in that ours was cooler)

The groups of kids coming by were spread out so we couldn't teach a group of 8 all at once like in previous experiences. Thankfully we had BigThought volunteers helping out. We couldn't have done it without the 5 of them. We ran through the presentation for them at the beginning, as we still thought that's what the plan was going to be, so they knew how to teach it after a few more pointers. Out of necessity it was basically one-on-one teaching, but that meant many of the kids got much more into it than they would have in a larger group. I had one mom comment that this was the most focused she had ever seen her daughter, and a couple of boys tweaked their program so much they ended up winning against everyone except each other. This event definitely got a lot of kids really excited about robotics, and we're hoping they'll look into a team or a club at their schools.

Keychain modeling went smoothly, and we ended up getting all the models printed or printing before leaving, and most given to a parent or kid at the event. We got addresses for the leftover few and are planning on sending them off within a day or two. A group of friends worked on a collaberative house, one doing the rooms, one the design, one the roof. It turned into a massive house when they had to leave, and we made sure to tell the kids and the parents where to find SketchUp if they looked interested. We had a huge number of kids throughout the day and it was a great event and great group of volunteers to teach with.