Task: Present at the MoonDay Event 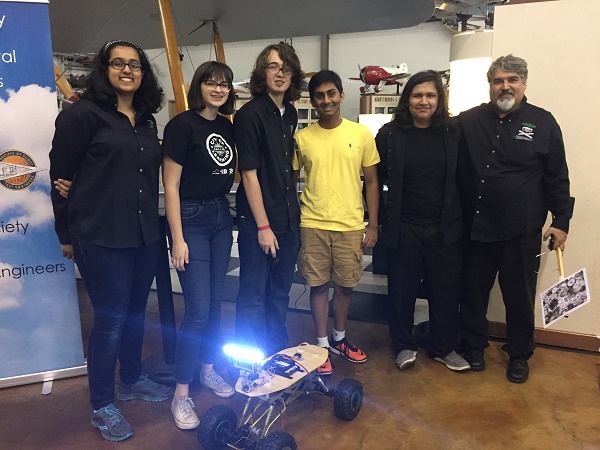 Today, Iron Reign was invited to the Frontier of Flight Museum by Dallas Love Field Airport for a day of STEM knowledge for its annual "Moon Day". It was time for us to bring in the LEGO robotics kit, 4 laptops for kids, ARGOS, and Juggernaut, our competition bot from this past season. Upon arrival at the museum, we noticed many other fascinating stations such as one explaining NASA's new rover and a model in the arena. We paired up with some other robotics members in the region to set up a station where we could help robotics beginners program the LEGO bots so that the bots could wrestle eachother like Sumo wrestlers. In addition, we fixed ARGOS so that the color sensor would be able to sense a stick in front of it to follow the sign. This allowed us to let other students drive the bot. The same was done with Juggernaut.

Our LEGO station was set up in a way such that even people who couldn't type could use it. We helped people code a bot that drives forward till the bot reached the edge of the board, turns backwards, rotates, and then repeats these reactions until the program is terminated. The students learned that the robot was able to determine when it reached the edge of the board by using the color sensor located on the bottom of the robot. Since the board is built in a dartboard sort of manner with the majority being black and a white ring around the edge, the robot was taught by the students to only stay on the black and not continue if the sensor is on the white. The students had the ability to individually change the speeds of their bots so that when the compete with one another in the "Sumo" game, there could be a winner.

We decided to use ARGOS and Juggernaut as play bots for the day and drove both around. While doing so, we discovered that ARGOS had a bug which, though controllable, was inconvenient. ARGOS' movement system was developed in a way such that the acceleration would compound based on the number of seconds the joystick was pressed in a certain direction. Currently, ARGOS had to be coded this way since we didn't have encoders and power was the only way to put speed into the wheels. We are currently working on fixing this problem. Regardless, we were able to drive ARGOS around and let other children control it using the color sensor stick we developed. The stick was developed in a way that the bot would shine a light onto the area in front of it and if it found the image we had for the color to detect, ARGOS knew to move. We programmed Juggernaut in a similar way so students were able to drive it as well. Since Juggernaut also had shooting abilities, we were able to play catch with numerous people in the area including booth sponsors. In this way, we were able to teach others about the shooting mechanism and carwash system developed to pick up balls in the bot. This fascinated many young people and inspired them to pursue a STEM activity.

Numerous students from a wide array of backrounds came to Moon Day and we were able to spread the knowledge of robotics to them. We had many parents and educators ask us about ways to get involved and we gave them more information about FIRST and their message of Gracious Professionalism. Robotics gave us an avenue to connect with kids, regardless of their socioeconomic status, race, gender, or beliefs. This allowed us to make a deep impact on people and join forces with them to pursue something we are all passionate about. In a world filled with discrimination against those of certain groups, the Frontier of Flight Museum gave us a chance to move people by the wonders of robotics and encourage them to pursue what they want in life without caring about the discriminators. We hope to continue to make an impact on people through future events.