Task: View FTC Kickoff and plan for the year 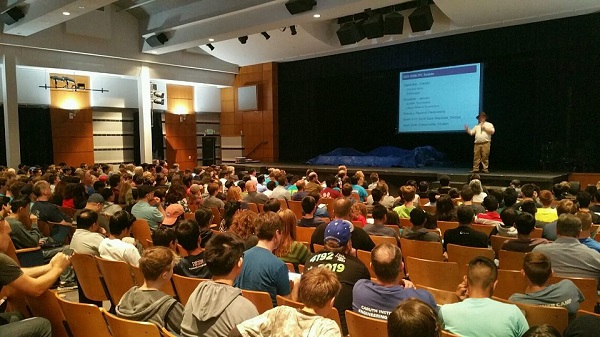 Welcome to FTC Relic Recovery! For those who don't know, this year's challenge is archeology themed, and it certainly will be a challenge. The goal of this challenge is to stack 6X6 in blocks (glyphs) in certain patterns to gain as many points as possible. The are also side challenges such as balancing the robot and hitting a specific field element to gain points. Due to the vast number of methods to score points, a robot must contain multiple mechanisms which are extremely accurate as well as quick.

Upon arrival to Williams High School in Plano, TX for the Dallas region kickoff, we quickly amazed. When the regional director, Patrick Michaud, asked the audience how many rookie teams there were, we were mesmerized by the number of hands that went up. Though the FTC organization was already very large, we noticed that the FIRST spirit and ideals of Gracious Professionalism were rapidly spreading to aspiring students of the North Texas region. This is very inspiring for both veterans and rookies because we need to work more closely than ever to mentor one another for our success in the 2017-2018 challenge.

Back to the actual game, before the game reveal, Dr. Michaud introduced the expanded compatibility for different kits and tools for this year's competition. REV robotics was present at the event and discussed their new sets of PDM's as well as new servos, etc. REV kits stuck out to us as we felt the Modern Robotics system, though did it job, had some issues. We hope to implement more REV parts this year for more accurate and efficient parts. Another change we noticed was a new set of smartphones as driver stations/robot controllers, the Motorola Moto phones. We, however, will continue to use ZTE and Samsung Galaxy S5 phones.

All teams were eagerly sitting on the edges of their seats while waiting for the 11AM official reveal of the challenge. Something unique we noticed for this year's reveal video was that there was a skit performed. We found this as enjoyable though we were all waiting for the official animation. Upon completion of the animation video, the field was unraveled and all teams were allowed to access the field and field elements. While doing so, we took note of some complications that we could run into. First, we noticed that the balancing stones had about a 2 centimeter height jump from the ground to their tops. This would mean that our robot would need to drive onto the platform which was at an elevation and then balance. Second, we noticed that the space in which the blocks needed to be placed was very tight. This means that if the robot is not very precise, it could risk the loss of valuble points and time. Lastly, we noticed that the furthest zone for placing the relics was a relatively long way away. Since the robot cannot touch the ground outside the field, this could create some complications, especially if we want to place both relics.

Taking these ideas back to the house, we put our minds together to identify a basic robot design. At kickoff, we noticed that the glyphs felt like the same material that the floor tiles were made of. Upon noticing this, we created a make-shift glyph to prototype with.

We're in for a hard time this year, but we'll have a solid bot. We're a little worried about the glyph-picker mechanism though, and we'll have to decide that in the next few meetings. Through the prototyping of the two intake and deposition systems, we hope to identify our design by the next couple of weeks.