Task: Work on designs for the intake system 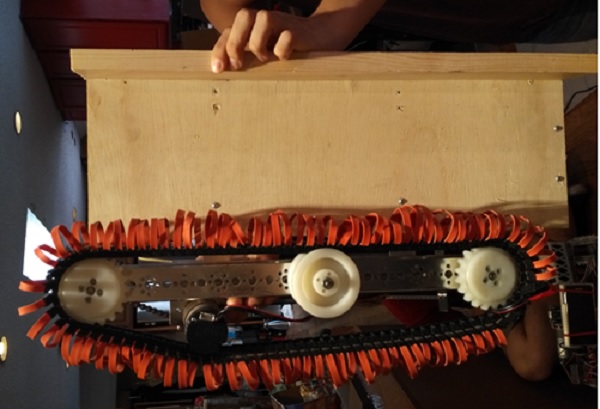 Over the past couple of days we’ve experimented with a horizontally mounted track system that we had hoped would serve to move blocks through the entire length of the robot and into the crypto box. Immediately we noticed a few issues, the primary one being that the tread was static in terms of mounting and therefore wasn’t accepting of blocks when feed at an odd angle. To correct our feeding issue, we widened the gap between the tracks and added rubber bands in hopes of maintaining traction and adding to on demand orientation ability.

Initial tests of our second prototype went fairly well, however the design suffered from some severe drawbacks; the first was its weight and size which would limit robot mobility and take up much needed space for other components, the second issue was that keeping the treads tensioned perfectly for long periods of time was nearly impossible and they would often sag leading to loss of grip, and finally the system was still fairly unpredictable especially during intake (blocks were flung occasionally). These finding lead me to believe we may scrap the idea in consideration of time.

Aside from our track intake we’ve also been working on a gripper and slide system that shows promise.