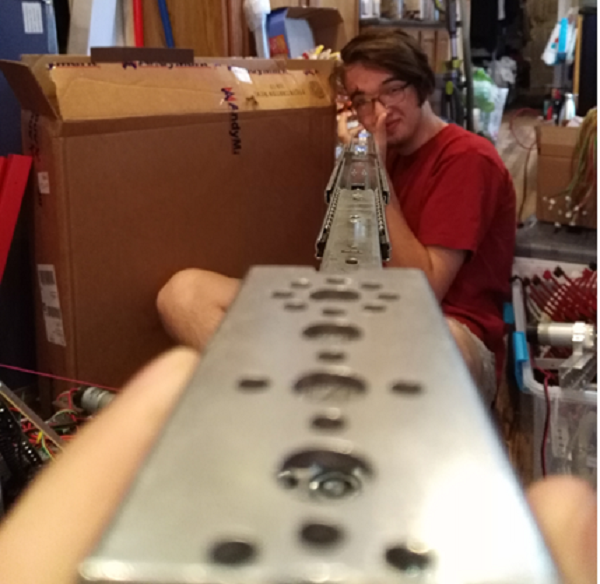 After determining that the treaded channel was much too buggy to perfect with the time we had, we shifted attention to other scoring systems like grabbers, however before finding the right grabber we decided we needed to get the track for it completed first. We’ve had experience in the past with all sorts of rails from Tetrix kits that convert their standard channels into lifts, to the newer REV sliding rail kits which we also toyed around with in initial prototyping shenanigans.

One of our key concerns was also wear and tear, in that we have had systems slowly breakdown in the past, such as our mountain climber and catapult, since they had plastic components that broke over time, we knew that long periods of use over multiple competitions would deteriorate the plastic components of either rail sets, and other rails that used full metal parts would simply be bulky and rough to fit in snugly with our robot. After a bit more research we settled on standard steel drawer slides from home depot, mainly because they were streamline and all around sturdy. The slides also provided us with easy mounting points for our future claw and attachments.

We understood that whatever option we picked for slides would have to be easily repairable or replaceable during competition, should something go wrong. Since the drawer slide were easy to come by and needed little modification we could easily make duplicates to act as stand by and demonstration parts during competition.

These positives came to form more than enough of a reason to continue prototyping our grabber that would eventually be attached once completed to the lift, which was now mounted to the robot and used a system of spools and pullies to extended above the minimum height for scoring in the top row.