The games have begun and it’s time to build. So that’s what Austin and I did. A war had been declared. Legions of the indentured collided on the battlefield. Millions were slaughtered during this new age armageddon. Austin had his army. I had mine. Two different ideas to do the same task: lift glyphs into their correct positions. A simple job but one that caused a rift in Iron Reign, an incurable rift between the forces of light and darkness. 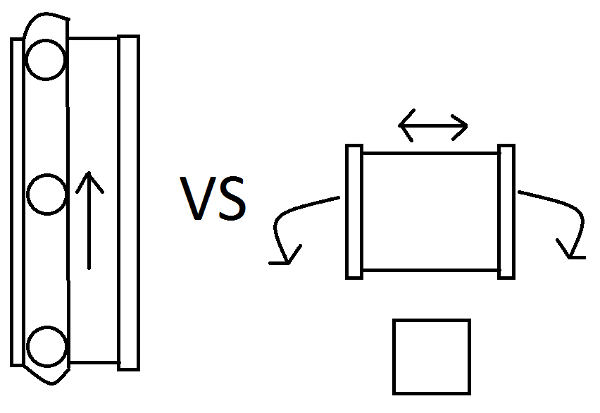 But then I decided to stop because his design had more speed than mine and speed is more necessary this year. My idea had been a lift that could move the glyphs back and forth but I realized that it would be a little too slow for the competition. Or, another solution would have had a side to side conveyor belt that moved glyphs back and forth to arrange them in the correct order, and then push them into the slots. This movement would have been separate from the four mecanum wheels that we are using in the chasis. His idea was simpler than mine, a conveyor belt that ran through the middle of the robot to bring the glyphs to the keybox, where they could be slotted in with the side to side movement provided by the mecanum wheels. So, like an outnumbered Supreme Court judge, I decided to join the winner so I could have a say in the early design. Once he got a prototype ofhis contraption working, it was able to pick up blocks effectively but it still needs improvement. It has issues with blocks at an angle, and it has trouble slotting the blocks into the keybox, but it's a nice step toward a working block system. We are currently planning to use the mecanum wheel base we used last year but this could change anytime. We left practice with a direction and that's better than nothing.