Task: Design a part to remove the jewel 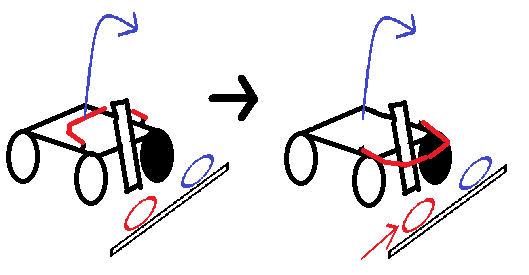 The jewel thief, the mechanism for knocking off one of the jewels, was going to be one of the tougher parts of our bot to integrate, based on the chassis we began with. But, with a little engineering and some long thought, we came up with a few ways to implement it. First, we began with a side mount, and it was alright for the angle, but we switched our autonomous plan to begin pointing forward, presenting me with a new problem. The part we had used before would simply not work. We tried a modified version of the pusher we'd made, but it didn't fully suffice. It was impractical and would require more than a little wire extention for the servo. We finally decided that a frontwards approach should be taken from the side. Instead of a single middle forward facing prong, a two bar prong sticking from either side, meeting in the middle, and providing a platform for a potential relic placer. While not completely finished, we intend to have it done by the first qualifier, fully functional. It should allow us to knock the jewel off during autonomous effectively and efficiently, although that’s all to be seen.