Task: Compete at the Oklahoma Qualifier 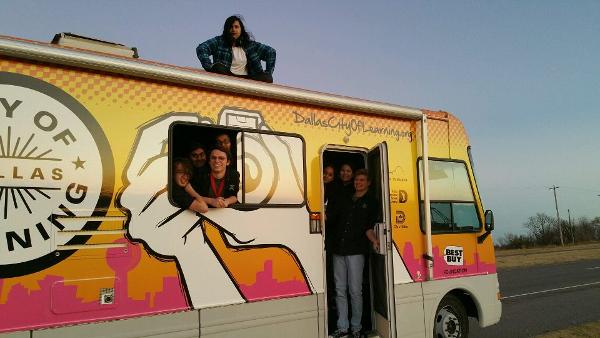 On Nov. 17, we went to the Oklahoma Mustang HS qualifier. Our strategy for this tournament was to attempt to qualify in multiple regions so that we have more chances to get to the South Super Regionals. For this tournament, the DISD STEM Dept. funded the tournament fees for us to attend, as well as housing for our team. We drove down there on our RV, and also fixed it up so that we could convert it into tournament mode.

For out-of-area tournaments, we have to prepare ahead of time so that we can get everything we need, since we can't really go back to get parts we forgot. So, this time, we created a packing list in order to ensure that we have everything on the RV before we leave. The complete list is below.

Before leaving, we had already encountered problems. Our RV's generator refused to turn on, which meant that we couldn't get AC, chargers, or any electrical components on board to work. So, we had to do a last-minute oil change. As well, we had trouble finding several important tool parts, such as our box of drill bits and other things. Running about an hour late, we finally left for Oklahoma. The drive took the usual 4 hours, stopping to get Schlotzky's™, and we arrived at midnight. After we were all assigned to our rooms and all, we did another runthrough of our presentation, then went to bed

We woke up by 7am the next day, and slogged our way out of bed to the Mariott™ Contentental™ Breakast™. Over breakfast, we discussed our strategies and rules for the tournaments. Some of the major points are these: 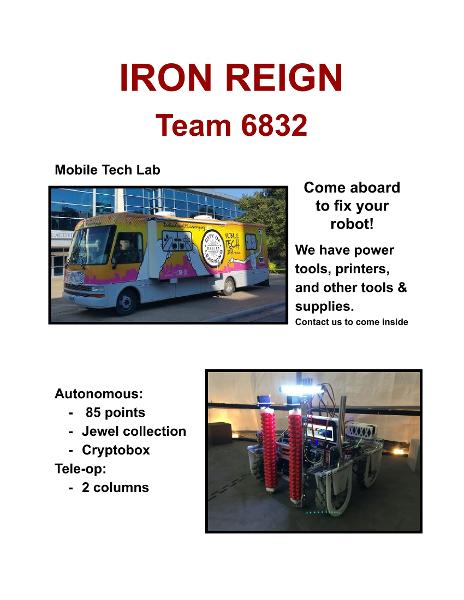 We didn't manage our time well for inspection. We hadn't really prepared our robot back in Dallas, nor on the way, so we had to attach the side panels and the buttons right as we arrived. As well, we had to make sure the bot fit within the sizing cube. Overall, our preparation for this section of the tournament was 4/10.

This was our largest improvement from last tournament. This was probably the best presentation we've put on yet. As well, our engineering journal was indexed a little bit better than last time. The judges also seemed receptive to our presentation and asked in-depth questions on our robot, which was very enjoyable and signalled that we would be considered for future awards. As well, we managed to get every judge in the tournament on the RV, every single referee, and about half the teams total. So, we did well on that front. As well, our strategy of trying to talk to every judge worked well, as we were able to cover a variety of subjects, ranging from our design process, to business, to our outreach, to women in STEM.

Our time-management overall here was not great. We'd rush to the practice field to try and fix parts, then get immediately called back to the round. I think we almost got disqualified 3 or 4 times because of this. However, this was our most successfull tournament in the robot game ever, since this was our first time getting 1st alliance captain.

Game 1 was one of the two games we lost this tournament. We lost by 20 points, and we managed to both knock the opposing team's jewel off, as well as not balance in the end-game. This match highlighted the problems with our autonomous' reliablility.

In game 2, we still had autonomous problems, but won a close game due to our stacking.

Game 3 was our best game, as we didn't experience any connection issues and got almost 200 points.

In game 4, our robot shut down throughout the game, but despite that, we ekeed out a close victory.

We won game 5 by about 30 points, as we stacked 2 columns, got a jewel, and balanced our bot. At this point, we became an alliance captain and chose team 3732 Technical Difficulties to be our partner. We had connection problems throughout the next games that hampered our ability to score.

We improved a little and got about 120 points as we fixed a servo between matches.

We lost this game due to connection issues.

This was our closest game, as we won by 2 points, since we were able to stack blocks *slightly* faster.

We won this game by 20+ points as the opposing team failed to balance one bot.

The first award we won was the First Alliance Captain award, a first for our team, so we were overjoyed about that. Then, we also won 1st place Control Award, another first for our team. This was especially suprising, as our autonomous failed quite a bit throughout the tournament. Finally, we won 2nd place Inspire Award. While this is still a great accomplishment, we'd like to work on this a bit more and get 1st place next tournament in January.