At the Oklahoma qualifier, we saw numerous teams with similar systems to that of ours. However, since we had the mobilized gripper arms to stack with auto alignment, we were able to collect glyphs easier. In spite of that, after observing other teams in action, we realized our current gripper method had the issue of not being ready by the time we got back to the cryptobox. This is because we had to turn around everytime we needed to pick up glyphs and we also needed to pick up glyphs. This leads to longer time to fill the cryptobox, something that is not good if we plan on recovering the relic later in the season. As a result, we decided to upgrade our arms to a new level: a chain based intake system. 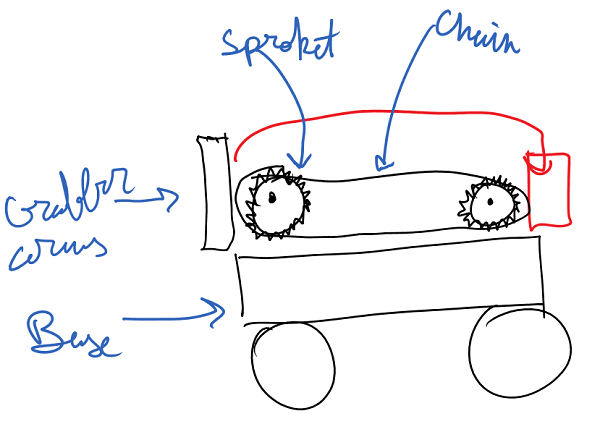 The idea behind this system is that the grabber arms would be on a mobilized chain system, kind of like a conveyor belt. One of the reasons this is much faster than our old system is that we don't need to turn our robot around as we approach the cryptobox. We can drive forward, pick up glyphs, and as we drive backwards, we can use a toggled button on our gamepad to move the grabber arms to the back of the robot upright. As a result, by the time we get back to the cryptobox, we have the glyphs ready to place.

Another benefit of this new system is that we don't need to stack glyphs. When we drive forward to pick up glyphs, we can tilt the grabber arms forward so that even if the pre stacked glyphs look far apart, they can still be in-took with the tilted system. Also, this system can be used for intaking the relic in the future. If the chain system is placed on an elevated level on our robot, the grabber arms will be taller than the field walls. Because of this, if we pick up the relic when it is on the ground, we can place it easily. 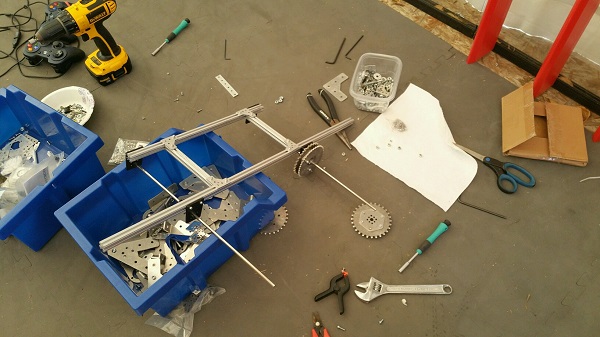 This picture represents our current progress. We hope to complete this system soon so we can test it on the robot.