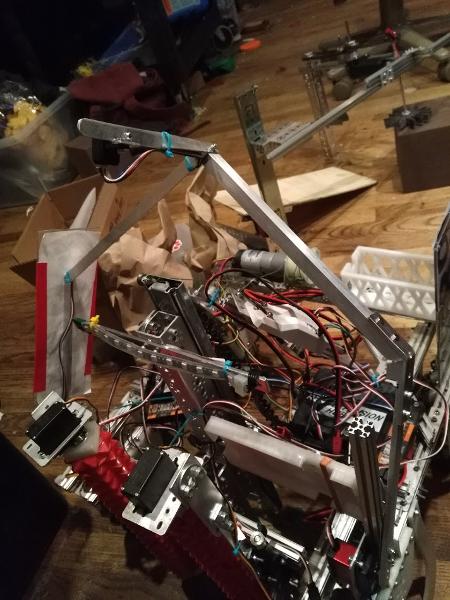 The jewel thief we built before *worked* but that was about it. More often than not, it failed or, even worse, knocking off the wrong jewel due to instability. And, in the Greenhill Qualifier, we lost several rounds because of a problem that could've been easily fixed. So, we had to redesign it.

The jewel thief was initially intended to be simple. It was comprised of no more than a 180 degree rotation servo and an arm with a standard rev color sensor. The arm was foldable and collapsible so that it would fit inside our robot, and as the servo turned out to its extended position the arm would open up with the help of a single bungee cord.

This plan had a few inital downfalls: first, the arms were rather large, clunky, and never really folded well into position, second the arms was heavy due to the use of tetrix bars meaning that the servo would strain, and finally the overal position of the arm was inconvenient for our autonomous programing, so we moved on completely. Rather than focusing on a single arm that could extend to reach the jewels, we decided to focus on something that would conform well to our current setup and then focus on making it long enough to reach. We realized that the outer edge of the robot was open enough to contain a V-shaped device that would rise 180 degrees over the head of our robot. The immediate perk to this was the fact that the system would be 18 inches in length. We felt no need to update which sensor we were using at the end of whatever mechanisim we finally attached, since the rev color sensor served it purpose correctly and effectively each time we had tested it in the past. Our final design was the V-shaped rim that laid flush with our robots exterior and was made from cut and bent L-bracket and was moved with two continuous rotation servos.