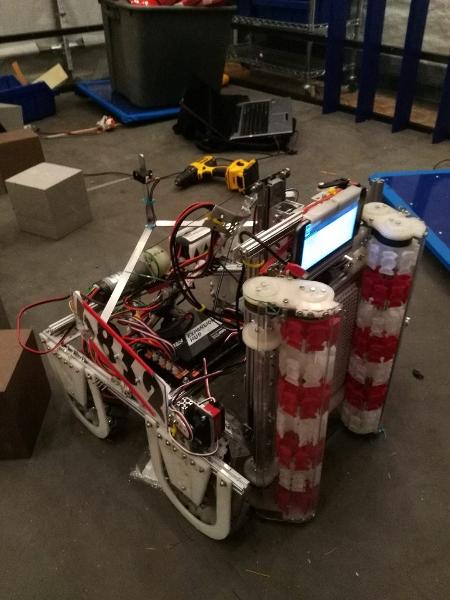 When we designed our new grabber with the octopuckers, one of the variables we neglected was the width of the new grabber once assembled and resting. After the grabber was completed it’s width was actually greater than that of the housing bay we had built into the current drive train, so to get the grabber to fit we actually had to widen the bay. We had know from past experience that the base was never truly square, so we took this necessary widing as a chance to resquare the base and drastically improve the efficiency of our mecanum drive. We added ¾ inch to the inside base and the resquared the frame before finally bolting everything down and attempting to mount the new grabber. Because the closed grabber barely fit within the new widened bay we had to cut away portions of the frame over the front wheels to allow the octopuckers room to actuate.

The other key chassis modification needed to accommodate the new grabber system was a lift bolstering. We decided that to handle the newly doubled weight of the grabber we would share the load across two strings and convert to a double pulley system. The lift was also strengthened with newly squared and adjusted cross beams similar in length and angle to the other iteration. Because of the double pulley, we also centered the drive motor and utilized a second spool. The pulleys rest on either side of the lift system and are both being run by the same motor.