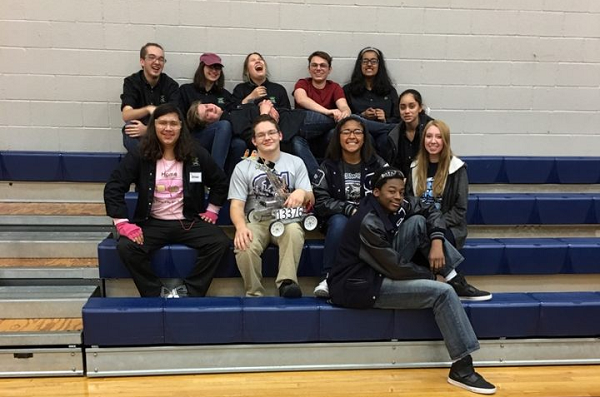 It was a cold and dark morning. The howling winds of a cold front rushed through the grass. Under this cover of darkness, one car after another pulled up to a house, dimly lit. A car door would open for a second, letting a child out into the cold night. Under these auspicous conditions, each child wandered into the house, only for a moment, and left again, and boarded an RV. Thus began the Wylie East Qualifier.

We arrived at Wylie about 7:50 AM, and unloaded. Unlike previous tournaments, we had actually prepared our robot the night before. So, we were able to get in and out of inspection pretty fast, which was nice and definently reduced our stress about time management. Our only worry was that our robot was too big for the sizing cube, as we had measured the robot to be 17.96875 inches in length, leaving 1/32 of an inch. And since that is *probably* within the production error of a sizing cube, we were mildly worried. Still though, our robot barely slid in. We passed the rest of inspection with flying colors.

We had been preparing to pack Friday, so we had all our tools ready. However, we didn't use the packing list we had previously, and we felt the effects. We forgot encoder cables, and even a flathead screwdriver. While this really didn't hurt *us*, it hurt our sister team, and we weren't as helpful with other teams when they came to us. The one pro of forgetting a lot of our stuff was that the unload was really fast, and we set up our table and got it organized in under 5 minutes.

Next up was judging. We'd neglected working on our presentation previously, as we had to prioritize even more neglected items such as drive practice. And, it was pretty obvious. We had a few stumbles, a few missed cues, and we even managed to miss a slide. Despite that, we were able to convey our team's progress and history to the judges effectively, and they seemed to be enganged and asked relevant questions. If there was one thing we could change, it would not be the prior errors, but that we took too much time in the presentation, and didn't leave enough time for questions. NOTE: A judge later told us that we should clairify information about our MXP in the presentation

We won this game by a large margin -> 122-40. Our autonomomous definitely pushed us over the top here.

We lost this game. Our teleop speed and strtegy didn't work against our team, and our partner had connection issues.

This was a surrogate match, but we were still very happy about winning this. We performed pretty well *and* the opponent's bot shut off.

We won this game with our largest margin, 106-12. We performed well in all aspects of the game, and we should replicate this success.

We lost this game by our largest margin, 236-76. We were outperformed in the autonomous and teleop by large margins, and failed to get on the balance stone.

We won this game, again by a decent margen. We did very well in the autonomous, and the other team just couldn't catch up.

We lost both these marches by good margins, we couldn't really compete with Tech. Diff's teleop with our autonomous.

Usually, judges come and talk to your team if you're being considered for an award, so we have at least two people at our table at all times, and we sound an alarm so that the entire team can come and answer questions. And so, we sat, and we sat, and we sat, and no judges came. But then, with just five minutes left, we were blessed with an apparition of judges. We walked into the ceremony more confident than we were, and were reasonable impressed when we won 1st-place Inspire.