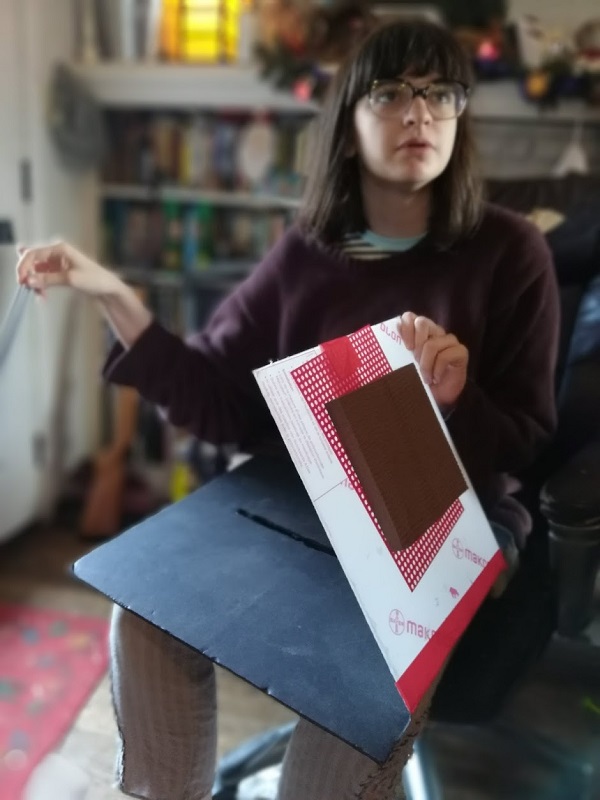 Iron Reign has used many different materials in years past. In those years, we usually preferred materials which were more durable. We started with ABS, but while hard, it was relatively brittle. We attempted to use Filoflex and Ninjaflex, and they were more durable, but too soft. Finally, we had used nylon for the past seasons, as it was extremely durable but also was hard enough to get the job done.

However, our needs have changed. In this challenge, we have to consider not only durability, but also how well the material works with other materials. And, the most important dynamic we must consider is the interaction with the foam blocks and the gripping material, since it is the major point-scorer.

The coefficient of friction determines the power of the force in the opposite direction of motion. While friction is determined by ƒ=µn, we can ignore the normal force when using the same object repeatedly.

In this, we created an inclined plane that rotated around the base so that we could change its angle slowly from 0 à 90. The coefficient of friction is equal to the tan(ɵ), where ɵ is equal to the angle of slippage. We had to overcome some hurdles, most notably the higher center of gravity of a standard foam glyph, so we cut it down to one-inch of height so that it wouldn’t slip. Another way to restate the tan(ɵ) is the opposite/adjacent of the triangle formed by the incline.

We slowly increased the slope’s angle until the block slipped, then recorded the angle of slippage to calculate the coefficient of friction, µ.

We found, as we expected, that the Ninjaflex sheets have the highest coefficient of friction. The most important thing to do to further increase the coefficient of friction is increase the area of the contact. While we obviously can’t increase the surface area of the block, what we can do is increase the contact points between the sheets and the glyphs. The main way we can do this is decreasing the quality of our prints, counterintuitively. The reason for this is that the decreased quality creates little fibers that stick up from the print which create more contact points.

In the future, we should test multi-layered prints, as that ought to further increase the number of contact points. We also plan to impregnate the prints with fine garnet dust, which will hopefully make the sheets more abrasive, and therefore have a higher coefficient of friction.

A critique of this experiment could include that the actual type of friction in the robot game is kinetic, or rolling, not static. In this case, the friction would be higher than rolling friction but lower than kinetic. This is due to the grippers pushing the blocks in, increasing the normal force. However, most coefficients of friction are proportional, so we can extrapolate from the static friction we gained to assume that the material with the highest coefficient of static friction will also have the highest coefficient of kinetic/rolling friction. In the future, we will also test kinetic friction with a spring scale.

This source serves to prove the higher coefficient of friction of Ninjaflex – our experiment varies as we leave the 3-D printing artifacts on the sheet. As well, this measures a different type of friction than ours.