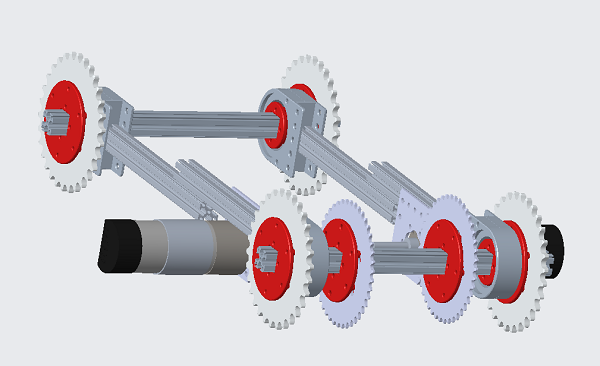 After analyzing the lack of speed from our last competition, we decided to continue the journey of attaching the gripper arms to a conveyor belt as previously designed. To do so, we realized that we needed to utilize the REVolution system to make the grippers work better. Also, we needed two points of attachment for our robot after seeing that one didn't work with the first version of the conveyor. To figure out how to do all this, we went to our best tool: Creo Parametric.

For the next part of the assembly, we had to make a couple of subassemblies. First, we attached a Sprocket hub that we custom designed for the REVolution system and attached it to a 35 Sprocket from Andymark. The other end was plugged into another hub. This sub-assembly was replicated 4 times so that it could fit on all of the conveyor belt pieces. Also, we had to make a similar subassembly for the 25 sprockets since those are what our motors were designed to do.

Finally, we mounted two motors on the insides of the REV rails. The sprocket attached to this motor would connect to the REV rails so that the whole system could actuate. This was constrained using coincidence.

We really liked how this model turned out. By starting to build it based on the model, we realized how useful Creo is to our design process. We hope to use it again soon for determining how to mount the grabber arms to the belt system.