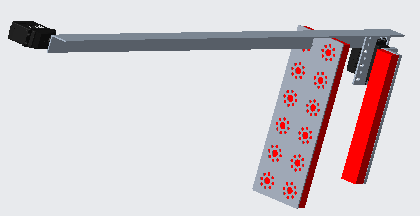 Now that we had developed a glyph game and a stable autonomous, it has come time for Iron Reign to conquer the true challenge of the 2017-2018 competition: Relic Recovery.

After seeing that many record setting teams have built "dump truck" robots that can fill both cryptoboxes with incredible speed and accuracy, we realized that if we developed an accurate relic arm, such teams would ally with us and our alliance would be able to maximize the RR score. At the start of the season, we prototyped this project a little but in the intensive time dedicated to the grabber, the prototype was left to rust. When I picked it up again, I realized a drawer slide system would be heavy and not preferable due to its unwieldy mounting. While the discussion continues on what the release mechanism of the arm should be, we developed a CAD model of the relic arm itself, as seen above. 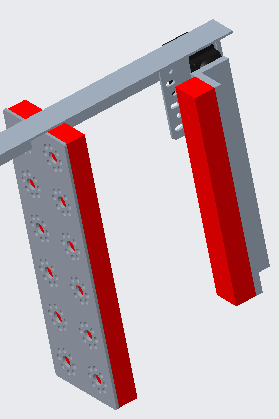 The primary components of the arm are a TETRIX plate and small aluminum bar. The aluminum bar is made of the same material as the Jewel Thief. This bar is attached to a servo sticking at the end of the arm which can move to close in on the relic. The red material is a rubbery material we hope to use for better traction of the relic. We are considering the same silicone material as seen on grabber arms v2

We hope to prototype this and place it on the robot as soon as possible (maybe in time for our regional tournaments). This would make us a good alliance partner for other teams so we are working hard to making this model a reality.