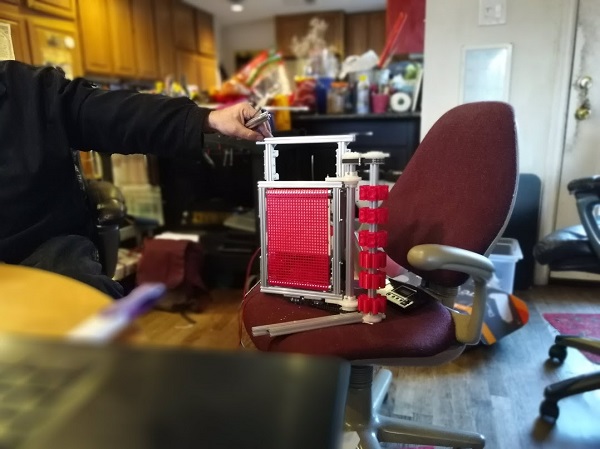 So, we probably won't finish both the Grabber V.5 and the Flipper designs by the North Texas Regional this Saturday, but we really need to improve our grabber system so that we have a chance of doing well in the robot game. From our last post-mortem, we decided that while our grabber performed *well*, it obviously could have been better. So, in comes our new design.

Our main problems with our last grabber were twofold. First, our internal conveyor belt did not work as well as we had hoped. The point was to deliver blocks to the upper areas of the grabber, and it wasn't really doing that. The first cause of this was that it wasn't catching the block in the first place, as we had designed the internal lift too high off the ground to catch. The second issue occured when the block happened to be in the lift system. It was supposed to stay in place due to friction, and to have friction of an effective magnitude, the normal force must be reciprocated. And, ours wasn't, as the only thing that the block was able to push off of was the rubber mesh we designed, which had a high coeffiecient of friction, but not the rigidity needed so that the normal force was reciprocated 100%. So, so solve that, we installed a backer plate behind the mesh that the block can push off of, which has a higher reciproccal force than before. A final, more minor problem was that the block weren't always staying in the lift at the top, so we designed new Octopuckers to both push them in, and damage the glyphs less.

Our eventual intention is to do away with this system, and move on to the v5 system which carries the blocks over the robot entirely, but for now, this should do.