Task: Describe the physics of the gripper

We always struggle a little with describing our robot to the judges. So, this post will be the third in a series of posts describing the physics of our robot (four if you count the coefficients of friction). First, we have the free body diagrams of the gripper.

Under these circumstances, we recorded an average maximum of 4.125 oz of force, which translates to 1.147 N. This translates to an increase in the normal force of +6.882 N. This, in turn, increases the frictional force of the internal lift by fk=uN, where u is the coefficient of friction of the internal lift to the glyph. fk=1.96*6.882=13.489N. So, the simple creation of modified intake octopuckers allowed us to increase the frictional force by +13.489N, which allows our internal lift system to operate.

Force exerted by the octopuckers vs time 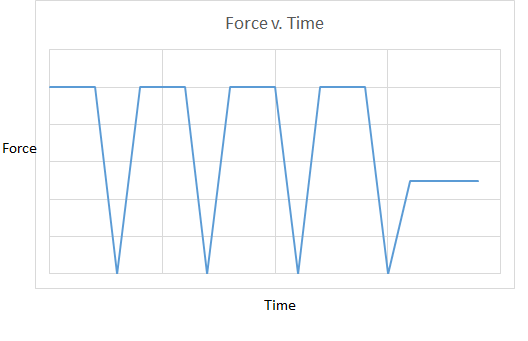 On Saturday, we will continue this series of posts, finding the series of constants in infopost #2.