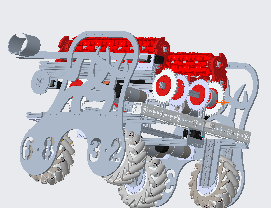 With FIRST Champs right around the corner, we needed to update our CAD model to match our current Kraken. After all, Kraken can't be lackin' any features. I decided to reopen Creo and make some modifications.

One of the most important things I needed to put on was the Relic arm. After planning on it for the whole season, we finally finished it recently. I made a quick CAD model for it in a separate assembly. The servo horn with a custom made circular disk for holding spool was attached via co-incident constraints. The linear slide system was represented with coinciding a set of REV rails to do this job. The elbow joint with actual grabber was done previously in another assembly. Once I finished the Relic arm assembly, I constrained it to the Robot model using coincident and distance constrains. I also made a small modification to the existing Jewel arm to account for the alignment on our actual robot. I used angle offset for this.

Present this model to anyone who is interested in the specifics of our robot!