Task: Consider a Swerve Drive base

Last season, we saw many robots that utilized a swerve drive rather than the mecanum drive for omnidirectional movement. To further expand Iron Reign's repertoire of drive bases, I wanted to further investigate this chassis. Swerve was considered as an alternative to swerve because of its increased speed in addition to the maneuverability of the drive base to allow for quick scoring due to its use of traction wheels at pivot angles. Before we could consider making a prototype, we investigated several other examples.

Among the examples considered was the PRINT swerve for FTC by team 9773. After reading their detailed assembly instructions, I moved away from their design for many reasons. First, the final cost of the drive train was very expensive; we did not have a very high budget despite help from our sponsors. If this drive train was not functional or if the chassis didn't make sense to use in Rover Ruckus, we would have almost no money for an alternate drive train. Also, they parts used by 9773 involved X-rail rather than extrusion rail from REV. This would cause problems in the future as we would need to redesign the REVolution system for X-rail.

Another example was from team 9048 which appeared to be more feasible. Because they used REV rail and many 3D printed parts, this was a more feasible prototype. Because they didn't have a parts list, we had the find the rough estimate of cost from the REV and Andymark websites. Upon further analysis, we realized that the cost, though cheaper than the chassis of 9773, would still be a considerable chunk of our budget.

At this point it was evident most swerve drives being used are very expensive. Wary of making this investment, I worked with our sister team 3734 to create a budget swerve with materials around the house. A basic sketch is listed below. 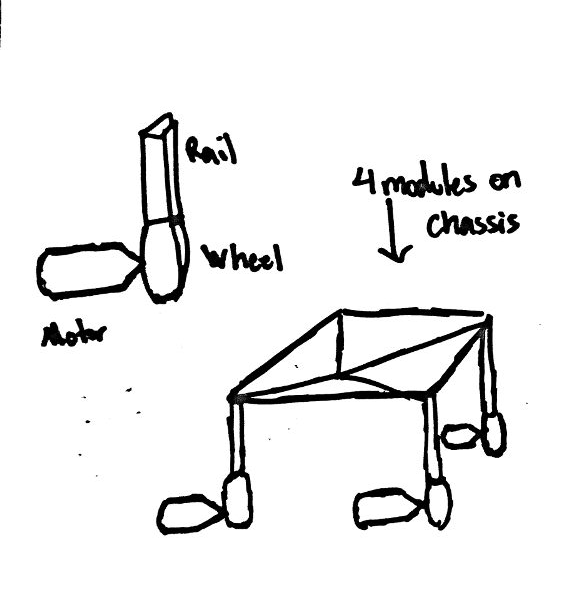 Scavenge for parts in the house and Robodojo to make swerve modules.