Iron Reign will be attending a scrimmage on Saturday, but to attend a scrimmage, you usually have to have a working robot. As of Saturday, we did not. So, a few of our members elected to come in on Saturday to do some last minute robot additions.

We've had a linear slide that we've been meaning to hook up to the robot for awhile, and we finally did it Saturday. We mounted it to the front of the robot, as it was the easiest access point, then mounted a motor and pulley on the side to extend it. It worked - and then it didn't - as it tangled itself inside the motor, necessitating a redesign.

Then we realized a more pressing issue. Since torque is equal to force * arm length (T=FR), and the force on our robot is only the force due to gravity (F=mg), we had a torque on the lift equal to T=mgR. Then, as the lift was mounted at the very end, the torque on the arm was at its absolute maximum. And, while we're confident in our building ability, we're not that confident. So, we realized that we'd have to move the lift closer to the middle to minimize torque. 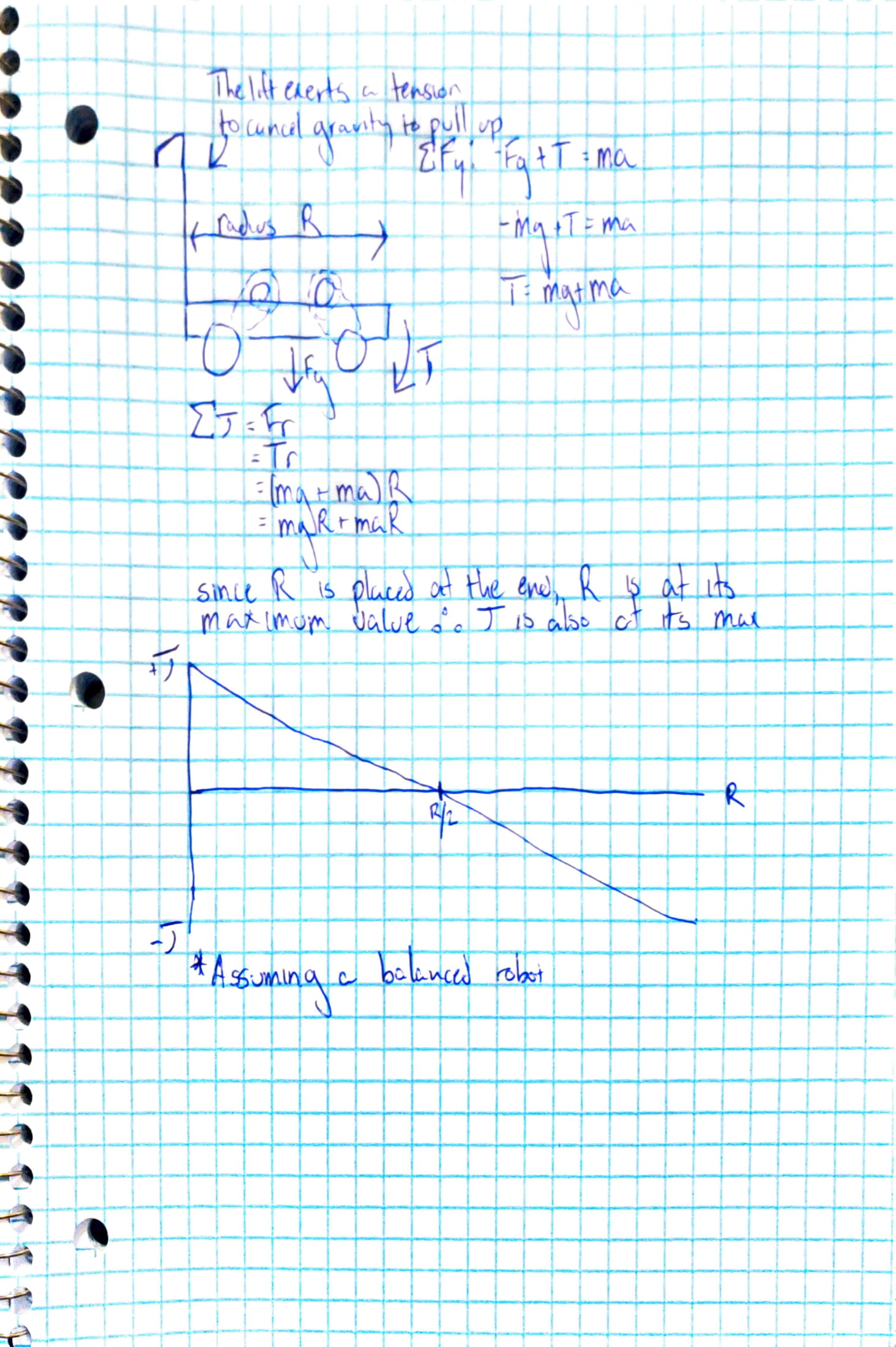 On Saturday, we worked on the red-silicone intake system, but there were still issues. We used too-long screws to mount the motor that cut into the sprocket, we mounted the fins a little to far out so that the silicone was running into them and losing energy, and we didn't have a way to mount it. First, we replaced the 15mm M3 screws with 8mm ones, ensuring that there would be no further collision. Then, we removed the beams the fins were mounted on and replaced them with a simple crossbar the we directly mounted the fins to. That way, we could adjust all of the fins at once instead of individually cutting each beam. Our robot is a little on the small side for Iron Reign. To mitigate that, we planned to add a second stage to the robot for support and to hold components like the second REV hub. So, we started on that, cutting the standoffs, and attaching one side completely so that we could use it as a proto-phone-mount.

To minimize torque, we moved the lift to the center of the robot. Now, this won't eliminate the torque - one side of the robot is much heavier than the other, but it makes it much more manageable. To have a functional robot, we have to have an intake *on the robot*. We had an intake, but it certainly wasn't anywhere close to being on the robot. So, we mounted a Core Hex Motor to the inside of our robot, attached a gear to our robot then bolted a second gear to our intake. Then, we attached the gear to a churro rail mounted on the robot and moved the motor to where the gears coincided. Originally, we planned to use a 30->90 gear system for a 1:3 gear ratio for a calculated 9.6 Newton-meters of torque, but this systed wouldn't fit within the size constraints, so we had to settle for a 1:1 ratio at 3.2 N*m. On our other robot, Bigwheel, we mounted the 2nd arm for a future beater bar. Unlike most of our robots, this one is mostly off-the-shelf, with some additional Textrix parts and a REV hub.

To be able to support our additional motors, we had to add a second REV hub. And, to do that, we had to finish the 2nd stage. This wasn't that difficult, all we had to do was attach a standard piece of REV extrusion to the remaining standoffs, then add a REV hub mount, then mount the actual hub. Our lift is a little bit wobbly laterally, so we took steps to fix this. We attached a small piece of REV rail to the second stage from the lift to minimize wobbling. This still needs to be worked on, as the rail isn't mounted well, but we'll burn that bridge when we get to it. Since our lift needs to extend and retract reliably, we have to use a double-pulley system. So, we strung upwards normally, but then attached another string to a higher up pulley that could pull the whole system back down. Our old pulley-motor was an AndyMark Neverrest 60. Now, we have nothing against these motors, but we wanted something that would be easier to connect to the REV hub. So, we replaced it with a HD Hex Motor with a 40:1 gearbox. This actually increased the torque by a negligible amount (from 4.186 N*m to 4.2 N*m), and was a more convenient change. Originally, we cut a box template out of polycarb that was the exact size of two silver particles. Unfortunately, we couldn't find a heat gun, so we had to go back to cardboard. We added the corn-cob intake from a few weeks ago onto this robot so that it can get both blocks and balls from over the crater wall.

Now, in theory, we have a competition-ready robot. 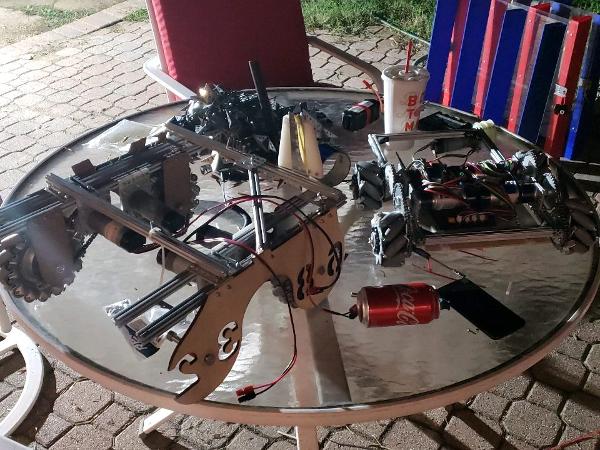 We still need to program our robot and fix any gremlins that pop up; this will happen at the Friday meet.