After seeing how well the robots that could latch onto the lander performed at the scrimmage, Iron Reign knew that we had to be able to score these points. We originally tried lifting with a linear slide system on MiniMech, but it was not strong or sturdy enough for the small chassis, and would definitely not be a functional system on BigWheel in time for competition. And so we thought why not use this opportunity to *flex* on the other teams with an alternative design? An idea was born.

We decided we would latch onto the lander using the same arm used for intake, and then pivot the main body of BigWheel up off of the ground about an "elbow joint", much like how humans do bicep curls. To do so, our motors would need to have enough torque to be able to lift the loaded chassis off the ground once the arm hooked onto the latch. First, we measured the mass of BigWheel. Then we found where the center of mass was located. The distance from the pivot point to the center of mass became our lever arm, also known as the radius. 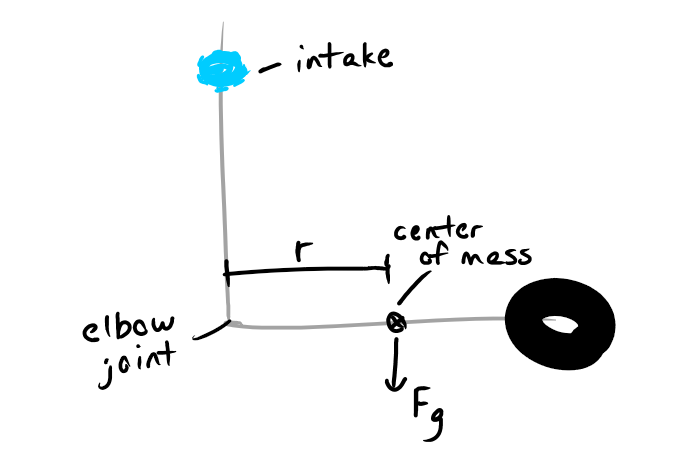 Calculating torque required knowing the forces acting on BigWheel at its center of mass. In this case, there was only the force due to gravity (F = mg). Before we could plug BigWheel's mass into the equation, we converted to units of kilograms (kg), and then used the value to find the newtons of force that would oppose the upward motion:

Finally, we plugged the force and radius into the torque equation:

The next step is to test which gear train will output this torque value based on the motors used and the gear ratio.