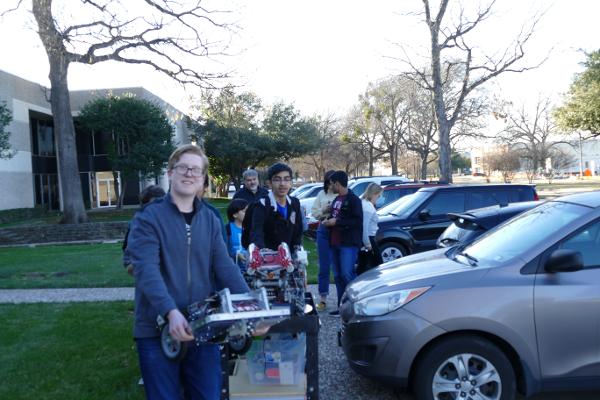 Today, a group of Iron Reign, Core, and Star members ventured down to the REV headquarters in Dallas. REV is a Dallas-based FTC+FRC parts company that produces their items at an accessible cost for all teams. All the SEM Robotics teams use REV, their parts are easy to use while still giving the ability to create technically impressive mechanisms. So, we were elated when we had the opportunity to visit them. 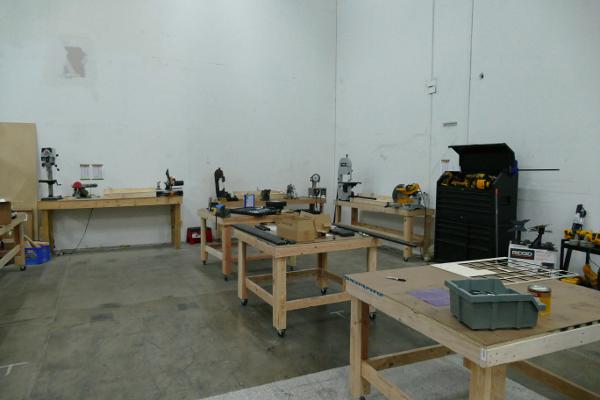 We started out with a tour, seeing the workshop in which they host their FRC teams - with RoboGreg inviting some of our members to apply to the new FRC team. Then, we saw the rest of the warehouse. Stretching infinitely towards the ceiling were rows and rows of REV parts in every variety imaginable with a center island of organized bins of parts. The last thing we were able to see on the first floor was the recording studio that REV's working on so that they can record tutorial videos.

We can't talk about everything we saw on the second floor, as some of it may not actually be released yet, but we can tell you of the Wonderland-like nature of it. As we walked in, we were met by a room dedicated to testing electronics. Iron Reign is accustomed to soldering on the floor or a hastily improvised bench or whatever clear space there is on the kitchen table, so this alone was enough for us to long to use it. And then, we were met by the 3D-printing room. You see, REV has two normal nylon printers that Iron Reign has plenty of experience with - been there, done that - but they also had a resin printer. We've never had the luck to see a resin printer in real life, only in far away youtube videos and whispers of whispers. In this alone, we were extremely jealous. Finally, we got to meet the engineers and have a general discussion with RoboGreg and David.

First, we got to learn about REV's design process. First, we learned about their revision process. They begin with a general idea, a goal that they want to achieve. Then, they create a small prototype with the tools they have at their home base if they can - after all, they have a reflow over, laser cutter, resin printers, and more we probably didn't get to see. From there, they send out their design for a small batch from a given manufacturer, just enough for testing. From there, they identify faults, fix them, and send for the next iteration, and so on. They end up with a finished product that, at the very least, has no physical/hardware faults; this is important as their philosophy is to give affordable parts to academic programs, and if they release faulty parts, they harm their customers. We learned a lot about the importance of a central design philosophy - something Iron Reign lacks. REV's is twofold: to make their parts affordable for those who normally wouldn't have access and to make their parts accessible for teams of all skill levels. 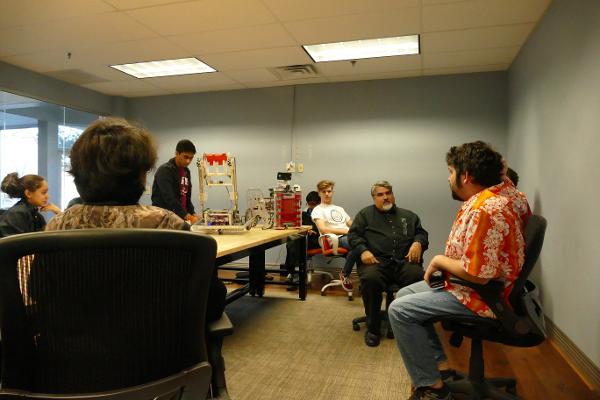 Finally, we got to the part in which we presented to RoboGreg and the rest of the engineers. Last year for Kraken, we designed a system called REVolution, which, when printed, allowed any team to turn REV extrusions into shafts. We felt that it made robots easier to build, so we presented it and asked for feedback. They were impressed by Kraken and liked the way in which it was implemented. Then, we learned some things about high-level design. First, an idea doesn't mean anything as long as it's just that, an idea. What differentiates those who do from those who don't is their vision and process to realize their ideas. In REVolution, we had done this. But, then we learned about a little system called Cost-Benefit analysis. As macroeconomics states, if a person chooses to make one choice, they inherently lose out on another, even if it isn't realized. In our case, it was this: if REV chose to produce the REVolution system, naturally, there would be other products that go neglected. And, one has to consider how a new parts system fits with the other parts; if REvolution were made real, one would have to create a whole extra parts library while still maintaining other similar rotation systems, increasing the work. It's not that REVolution is a bad system, its just that it could present too much of a tradeoff. In RoboGreg's words, this is "reality-based creativity."

We also asked some questions about things that Iron Reign wants to use; for example, where we could get access to a metal-3D-printer. We were informed that a local company down the road from REV, MLC CAD, was likely to provide this service for Iron Reign if requested. We asked for criticism of the REVolution system, learning that under normal operating speeds and temperatures, that nylon has the tendency to fuse with itself and that if possible, we should switch to a material such as Amphora.

We also presented BigWheel, this year's robot. We had some difficulties setting it up, but overall, they were impressed. The one point that we heard was that, when extended, BigWheel has a very high center of gravity, making it prone to tipping. We've considered it in the past, but really noticed it when it nearly hit someone rising up.

We learned so much here, and we'd like to give a huge thanks to RoboGreg and REV for giving us a tour. We want to implement the changes to our engineering process that we learned, and we're going to fix up BigWheel to solve its current in-presentation issues.