Tags: Mechanical and Control
Personhours: 3
Issues with Driving By Karina


Task: Get ready for Regionals

Regionals is coming up, and there are some driving issues that need to be addressed. Going back to November, one notable issue we had at the Conrad qualifier was the lack of friction between Bigwheel's wheels and the field tiles. There was not enough weight resting on the wheels, which made it hard to move suddenly.

Since then many changes have been made to Bigwheel in terms of the lift. For starters, we switched out the REV extrusion linear slide for the MGN12H linear slide. We have also added more components to intake and carry minerals. These steps have fixed the previous issue if we keep the lift at a position not exceeding ~70 degrees while moving, but having added a lot of weight to the end of the slide makes rotating around the elbow joint of Bigwheel problematic. As you can see below, Bigwheel's chassis is not heavy enough to stay grounded when deploying the arm (and so I had to step on the back end of Bigwheel like a fool). 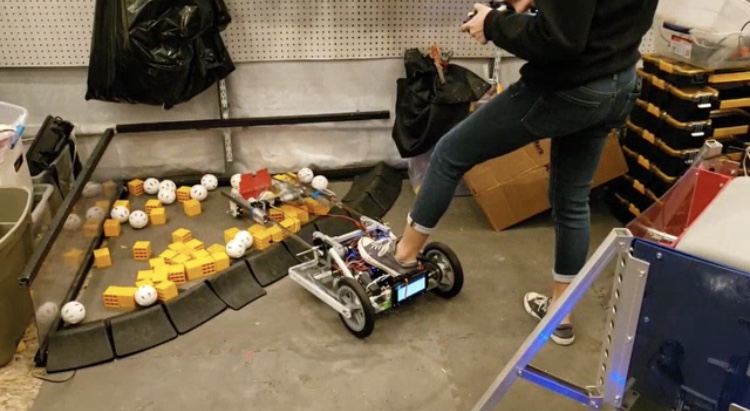 Another issue I encountered during driver practice was trying to deposit minerals in the lander. By "having issues" I mean I couldn't. Superman broke as soon as I tried going into the up position, and this mechanism was intended to raise Bigwheel enough so that is would reach the lander. Regardless of Superman's condition, the container for the minerals was still loose and not attached to the servo. Consequently, I could not rotate the lift past the vertical without dropping the minerals I had collected.

To run a full practice match, Superman and the container will need to be fixed, as well as the weight issue. Meanwhile, I will practice getting minerals out of the crater.