Task: Analyze past successes and failures in our latching system

The first version of the latch worked decently. We started out with the idea of a one-way, passive latch. This idea involved mounting smaller bearings and gears between them, with a spring-like nylon piece that moved only when downward pressure was placed upon the gears. This design was only fully realized before the Wylie Qualifying tournament, and only tested the night before. We found that the bearings popped out under pressure necessitating a reset after every match and meaning that we could only latch once per match. We opted for the endgame latch, as it was more reliable. But, this cut the amount of points we could receive immensely. After the tournament, we decided to do a full redesign. 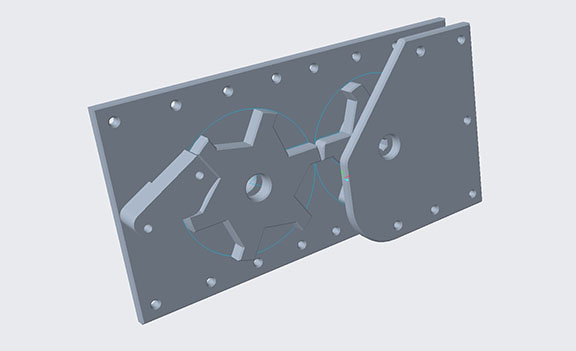 The second version's changes were simple. We redesigned the nylon "spring" and made it thicker and more prominent. This made it so the latching gears were more firm than before, which in turn allowed more weight to be put on them. However, the issue with the gears was still present; as the load on the latch increased, the nylon would bend more and more, allowing the bearings to fall out so that the latch would jam in place. This version was quickly scrapped.

At this point, we were sick of the bearings popping out. So, we widened the holes immensely to fit larger bearings which in turn had larger holes allowing for bolts to be run through. This was overkill, but it ensured that no slippage would occur during normal robot usage. Again, we also thickened the nylon "springs" so that the gears would stay in place without significant upward force.

We realized, that while technically impressive, the latch as we knew it had to go. It worked, but it was too time-costly to justify using, as the driver had to precisely line up the bot next to the lander to use it, taking about 20 seconds. In addition, it was difficult to code as it required several intricate simultaneous robot operations: the lift needed to descend at the exact same moment Superman needed to rotate, all while the elbow rotated the robot 90 degrees. In summary, it was an overly burdensome task. So, we threw away all that work, these past two months of labor in favor of a simpler option.

We decided that it was time to go back to the drawing board. In time periods, it was approximately a jump from the current era to the Iron Age. So, we designed appropriately. We designed a stainless steel hook, first making one out of prototyping wire. Then, we heated up the forge, adding plenty of coke, and set to work. We chose a stainless steel rod, 8mm in diameter and warmed it to red hot, beating out the initial design. We let the initial rod air cool so that it would be soft enough to drill through, creating the mounting point for the robot. Then, we reheated it to its critical point (when it loses its magnetic properties) and quickly quenched it to reharden it. But, simply quenching it makes the steel too brittle to use in competition, so we finished up the hook by tempering it, using an oxy-acetyline torch on it until the surface became matte. Finally, we had the hook seen above. After all that work, we'd gone with the simplest option because sometimes, it is the best.