Task: Build the base for the new robot 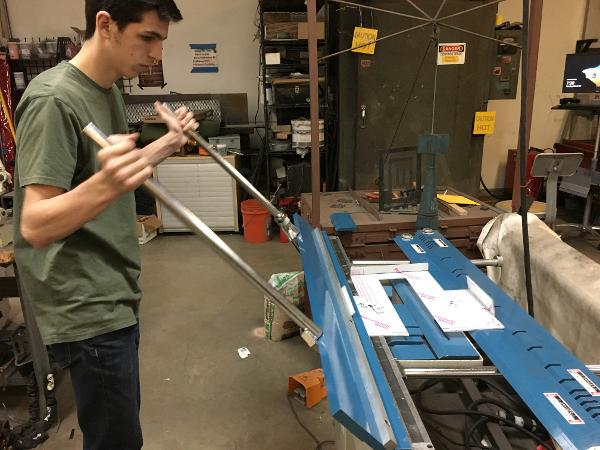 Since BigWheel was never intended to be a competition robot, we decided to build an entire new robot based off of it. This means that the base plate of the robot is going to have to be the most accurate part of the robot since everything after that has to be built upon it. To do this, we started out by measuring the base of our original robot, then squaring the whole thing out, making sure it was uniform across the base, down to 1/32". The inner slot that houses the superman lever was done down to 1/16" because it’s precision was not as important; it houses the Superman arm's wheels.

We cut and trimmed the basic platform using the table saw and clipped some of the thinner excess polycarb off with flush cutters. Once the base was cut to size, we moved onto the bends. The bends were measured exactly where they are on the outside of the current robot. To make precise cuts, we took a trip to the Dallas Makerspace. There, we used the sheet bender to bend our 1/8" polycarbonate which makes up the base, into shape. The walls of the base are then going to be connected to square aluminum piping that has been ripped in half to create the outer wall.

The task of holding the sides together will be done by two 3D printed parts that will house the LED strip that goes around the outside of the robot (used to communicate to the driver which mode we are in). This base will be much more precise than our previous chassis, making it more reliable as well. Finally, the new base will have more mounting points than before, allowing for greater modularity. The old robot will be a sparring partner for driver practice. The level of craftsmanship that has gone into this baseplate is industrial grade, we have done something comparable in precision and accuracy to any product meant to be mass produced. We can only hope that our final robot works as well as it's intended. 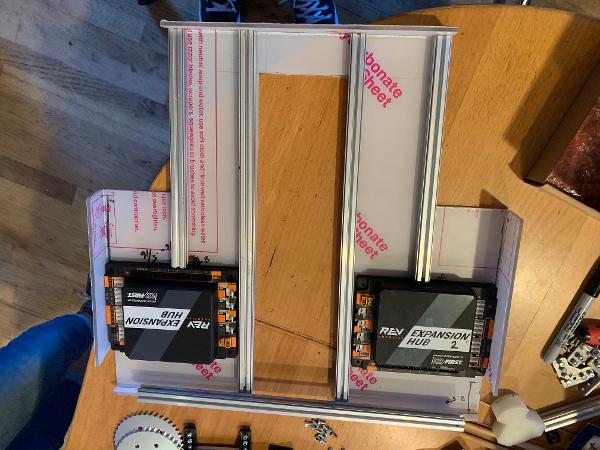 To have a fully supported base, we need to add the framing brackets and the wheels before it can be considered a wrap on the base section of the robot.