Task: Update code to get ready for UIL 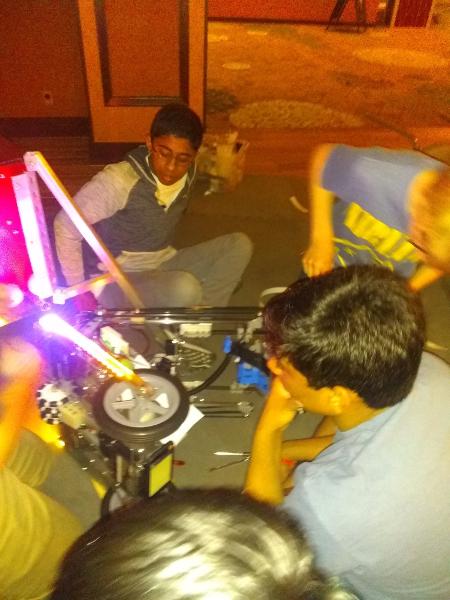 It's competition time again, and with that means updating our code. We have made quite a few changes to our robot in the past few weeks, and so we needed to update our code to reflect those changes.

Unfortunately, because the robot build was completed very late, we did not have much time to code. That meant that we not only needed to stay at the UIL event center until the minute it closed to use their practice field (we were literally the last team in the FTC pits), we also needed to pull a late-nighter and stay up from 11 pm to 4 am coding.

One of our main priorities was autonomous. We decided early on to focus on our crater-side autonomous, because in our experience, most teams who only had one autonomous chose depot-side because it was easier to code.

Unfortunately, we were quite wrong about that. We were forced to run our untested depot-side auto multiple times throughout the course of the day, and it caused us many headaches. Because of it, we missampled, got stuck in the crater, and tipped over in some of our matches where we were forced to run depot-side. Towards the end of the competition, we tried to quickly hack together a better depot-side autonomous, but we ran out of time to do so.

Some of the changes we made to our crater-side auto were:

We also made some enhancements to teleop. We added a system to correct the elbow angle in accordance to the belt extensions so that we don't fall over during intake when drivers adjust the belts. We also performed more tuning to our articulations to make them easier to use.

Finally, we added support for the LEDs to the code. After attaching the Blinkin LED controller late Friday night, we included LED color changes in the code. We use them to signal to drivers what mode we are in, and to indicate when our robot is ready to go.