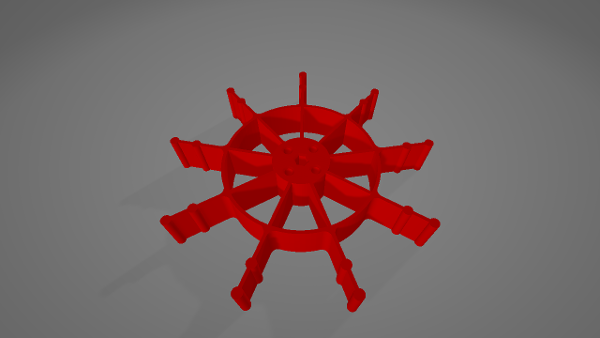 In testing, we found that the intake didn't perform adequately - the balls would slide back out in the inverse articulations. So, we designed attachments for the corn-cob intake out of ninjaflex, figuring that small tabs would hold the minerals in better. It failed - they were too compliant - but we found it was much easier to intake minerals than before due to the high coefficient of friction.

So, we decided that the corncob base was the issue. We designed a circle with the diameter of the previous corncob aligners and attached thicker tabs on the outside, creating the stl seen above. When tested, this was much less compliant than the previous beater bar, which served to make intake easier. In addition, the combination of reinforced tabs and ninjaflex prevented the minerals from falling out of the intake through increased coefficient of friction.

We plan to reattach this to the robot to do driver practice.