Task: Test the REV Control Hub ahead of the REV trial

Iron Reign was recently selected to attend a REV Control Hub trial along with select other teams in the region. We wanted to do this so that we could get a good look at the control system that FTC would likely be switching to in the near future, as well as get another chance to test our robot in tournament conditions before Worlds.

We received our Control Hub a few days ago, and today we started testing it. We noticed that while the control hub seemed to use the same exterior as the First Global control hubs, it seems to be different on the inside. For example, in the port labeled Micro USB, there was a USB C connector. We are glad that REV listened to us teams and made this change, as switching to USB C means that there will be less wear and tear on the port. The other ports included are a Mini USB port (we don't know what it is for), an HDMI port should we ever need to view the screen of the Control Hub, and two USB ports, presumably for Webcams and other accessories. The inclusion of 2 USB ports means that a USB Hub is no longer needed. One port appears to be USB 2.0, while the other appears to be USB 3.0.

Getting started with programming it was quite easy. We tested using Android Studio, but both OnBot Java and Blocks should be able to work fine as we were able to access the programming webpage. We just plugged the battery in to the Control Hub, and then connected it to a computer via the provided USB C cable. The Control Hub immediately showed up in ADB. (Of course, if you forget to plug in the battery like we did at first, you won't be able to program it.)

REV provided us with a separate SDK to use to program the Control Hub. Unfortunately, we are not allowed to redistribute it. We did note however, that much of the visible internals look the same. We performed a diff between the original ftc_app's FtcRobotControllerActivity.java and the one in the new Control Hub SDK, and saw nothing notable except for mentions of permissions such as Read/Write External Storage Devices, and Access Camera. These permissions look reminiscent of standard Android permissions, and is likely accounting for the fact that you can't accept permissions on a device without a screen. 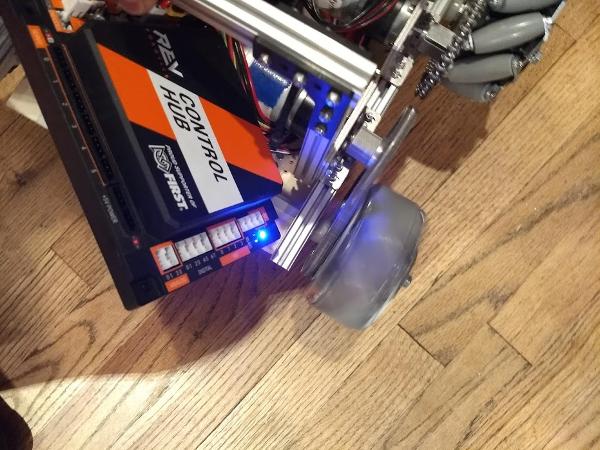 While testing it, we didn't have time to copy over our entire codebase, so we made a quick OpMode that moved one wheel of one of our old robots. Because the provided SDK is almost identical to ftc_app, no changes were needed to the existing sample OpModes. We successfully tested our OpMode, proving that it works fine with the new system.

Pairing the DS phone to the Control Hub was very quick with no hurdles, just requiring us to select "Control Hub" as the pairing method, and connect to the hub's Wifi network. We were told that for the purposes of this test, the WiFi password was "password". This worked, but we hope that REV changes this in the future, as this means that other malicious teams can connect to our Control Hub too.

We also tested ADB Wireless Debugging. We connected to the Control Hub Wifi through our laptop, and then made it listen for ADB connections over the network via adb tcpip 5555. However, since the Control Hub doesn't use Wifi Direct, we were unable to connect to it via adb connect 192.168.49.1:5555. The reason for this is that the ip address 192.168.49.1 is used mainly by devices for Wifi Direct. We saw that our Control Hub used 192.168.43.1 instead (using the ip route command on Linux, or ipconfig if you are on Windows). We aren't sure if the address 192.168.43.1 is the same for all Control Hubs, or if it is different per control hub. After finding this ip address, we connected via adb connect 192.168.43.1:5555. ADB worked as expected following that command.

Overall, our testing was a success. We hope to perform further testing before we attend the REV test on Saturday. We would like to test using Webcams, OpenCV, libraries such as FtcDashboard, and more.

We will be posting a form where you can let us know about things you would like us to test. Stay tuned for that!