It has been a very long time since we have reconsidered our auto paths. Between my last post and now, we have made numerous changes to both the hardware and the articulations. As a result, we should rethink the paths we used and optimize them for scoring. After testing multiple paths and observing other teams, I identified 3 auto paths we will try to perfect for championships.

These two paths represent crater side auto. Earlier in the season, I drew one of the paths to do double sampling. However, because of the time necessary for our delatch sequence, I determined we simply don't have the time necessary to double sample. The left path above is a safe auto path that we had tested many times and used at UIL. However, it doesn't allow us to score the sampled mineral into the lander which would give us 5 extra points during auto. That's why we created a theoretical path seen on the right side that would deposit the team marker before sampling. This allows us to score the sampling mineral rather than just pushing it. 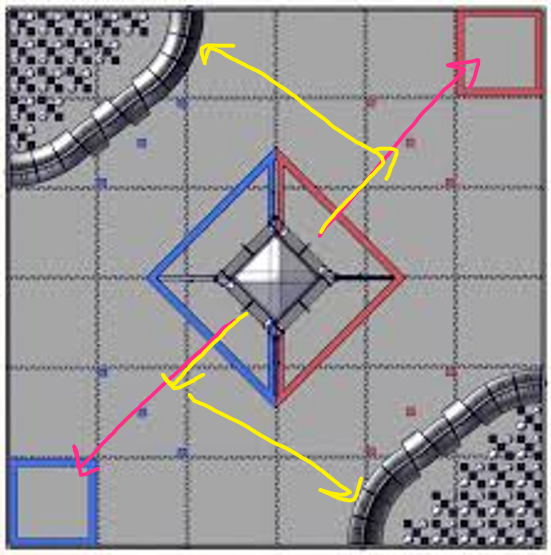 This is the depot path I was thinking about. Though it looks very similar to the past auto path, there are some notable differences. After the robot delatches from the lander, the lift will simply extend into the depot rather than driving into it. This allows us to extend back and pick up the sampling mineral and score it. Then the robot can turn to the crater and park.

One of the crater paths is already coded. Our first priority is to get the depot auto functional for worlds. If we have time still remaining, we can try to do the second crater path.