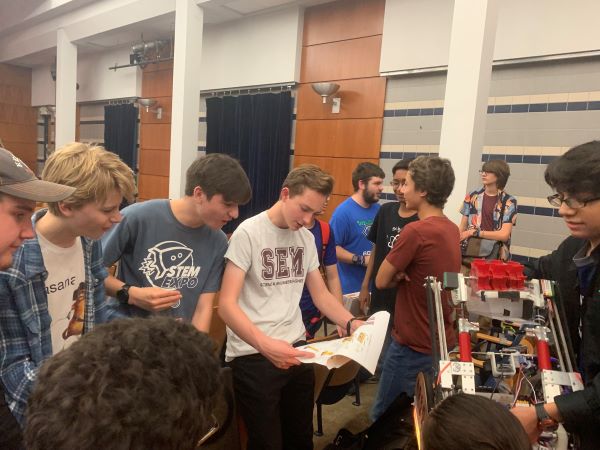 Today Iron Reign attended the FTC 2019-2020 season kickoff event at Williams High School. Team members and prospective members alike turned up to witness the unveiling of this season's challenge. As per usual, we were disappointed by the lack of water in the game, especially considering the amount of water seen leading up to the actual game reveal. Jokes aside, we are excited to tackle the Skystone challenge. You can see the reveal video below:

(Our robot from Rover Ruckus, Icarus, is featured in the video at 1:10!) There were some things we took away from the conversation prior to the game reveal. For one, we will definitely be using the REV control hub instead of an expansion hub this season, given our bad experiences with OTG cables disconnecting in the past. We also made note of the change in the way tie breaker points are added. The total will be averaged per match played, which will decrease the amount of jumping around teams do in the live rankings.

We also made some (fairly obvious) strategy decisions, such as the fact that we will not be doing offensive play because we cannot risk the associated penalties. Instead, we will focus on our robot's speed. We also plan to model our capstone after the shape of the stones to make it easier for an alliance partner to stack. Lastly, we will have to move the foundation in the direction that the smaller face of the stones points to minimize the possibility of it falling while maximizing efficiency. We could stack the stones in an alternating pattern, but we would have fewer layers supporting the capstone which would cost us points.

Part of the reason we needed to brainstorm strategy decisions quickly is because for the first time, Iron Reign is attempting the Robot in 2 Days Challenge. The Robot in 2 Days is usually a challenge taken up by long-standing veteran teams or alumni of those teams wherein they attempt to (and succeed!) at building a functional, coded robot in 2 days after the reveal. We don't think we will have a robot capable of performing all tele-op and autonomous tasks by the end of the weekend but the goal is to build a solid robot that can accomplish at least one tele-op game challenge.

Now that we know what kinds of tasks we're facing, we'll be moving forward into the discussion-and-prototyping phase of our Robot in 2 Days challenge. Of course, we'd like to thank REV for giving us a stone! Having at least one game element will make it easier for us to test our subsystems as we attempt to build a robot in a weekend.