Discuss the Impact of Our Robot in 2 Days Reveal Video

Tags: motivate
Personhours: 3
Discuss the Impact of Our Robot in 2 Days Reveal Video By Bhanaviya


Task: Analyze the viewer statistics of our Robot in 2 Days Reveal Video

2 hours after the challenge reveal for Skystone, Iron Reign kicked off the new season with a new robot - FrankenDroid. It's been one month since then and FrankenDroid has undergone several significant build and code changes (to be revealed in our next few blog posts!), and the video we posted on our youtube channel, Iron Reign, has reached over 2K views. The whole purpose of the video was to inspire teams who were having trouble coming up with build designs for their robots. As a team who's had its fair share of build challenges, we know how Robot in 2 Days videos can be pretty helpful to look at when starting off the new build season. 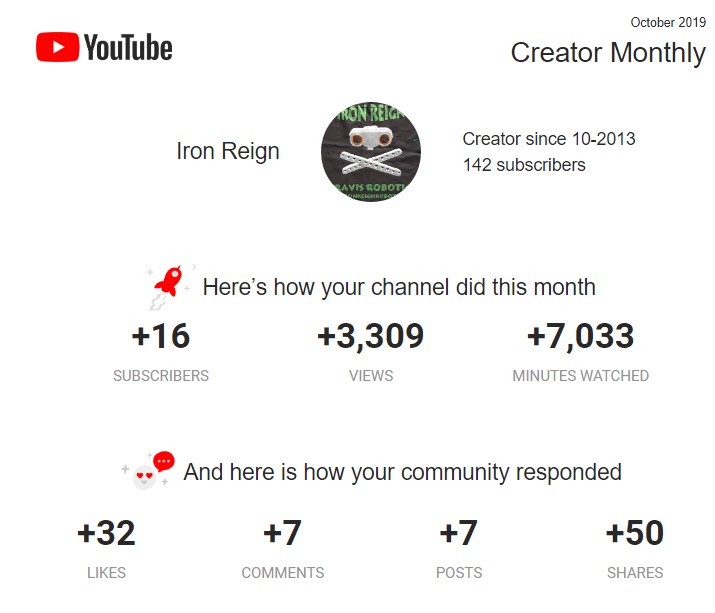 As shown above, the release of our video led to our channel receiving over 3,300 views and has a watch time of 7,033 minutes. This is an instance of online outreach and is the primary reason why all our journal articles and videos are public. The NTX region itself is pretty large compared to many other regions competing in FIRST, which makes for teams with active build seasons. Posting videos of this sort allows our team to share our build progress to the rest of the FIRST communities world-wide who may not be as expansive as the North Texas region is.

We hope our video was helpful for any teams starting off the new build season. We look forward to posting another reveal video once our robot for competition is ready.