Task: Lay out our robot's path for autonomous 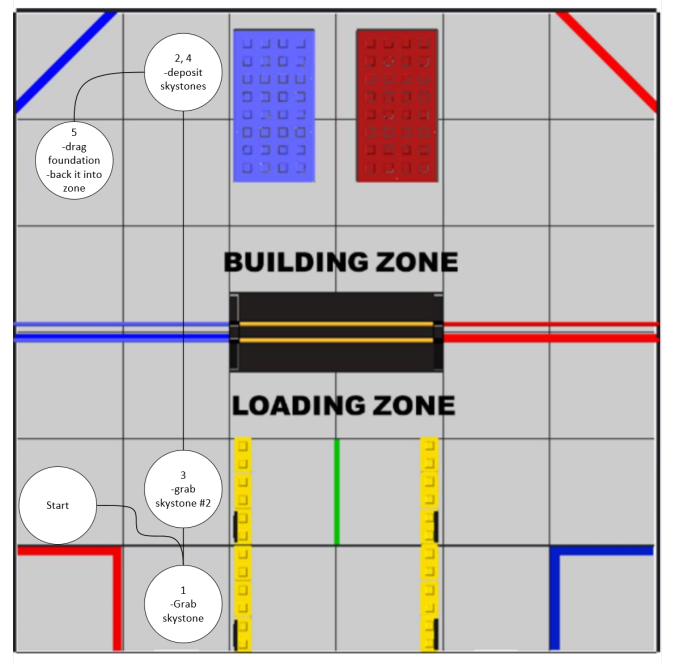 To kick off our autonomous programming, Iron Reign created our first version autonomous path plan. We begin, like all robots, in the the loading stone, its back to the field wall and with our intake arm upwards. We approach the line-up of stones and deploy the arm to its intake state over the last stone. At the same time, we have the wheels of the gripper rotating for a few seconds. The, we back up directly. Using IMU, our robot rotates 90 degrees, and then crosses underneath the skybridge to the building zone. About 1 foot past the end of the foundation closest to the bridges, we rotate again to the right and then deposit our stone. Afterwards, we retract the intake arm, back up, and then park underneath the skybridge.

Next steps: Improving autonomous by testing

The autonomous we have now is very simple, but this is only our first version. There are multiple steps that can be taken to increase the amount of points we score during autonomous.

In testing, I've noticed that (depending on how successfully we initialize our robot) the stone we pick up during autonomous sometimes drags on the ground. This creates a resistive force that is not healthy of our intake arm, which is mounted on the robot by a singular axle. To fix this, we can add code to slightly raise the arm before we began moving.

Eventually, when multiple teams on an alliance have an autonomous program, our own path will need to account for possible collisions. It will be strategic to have multiple autonomous paths, where one retrieves stones and places them on the foundation, while the other robot positions itself to push/drag the foundation to the depot.

Also, our autonomous path is geared toward being precise, but going forward into the season, we will need to intake and place more stones if we want to be competitive. As well, we will need to use robot vision to identify the skystone, and transport that stone to the foundation, since this earns more points.