Task: Transform a mass of metal into a functional something in the span of one night in time for the qualifier tomorrow. 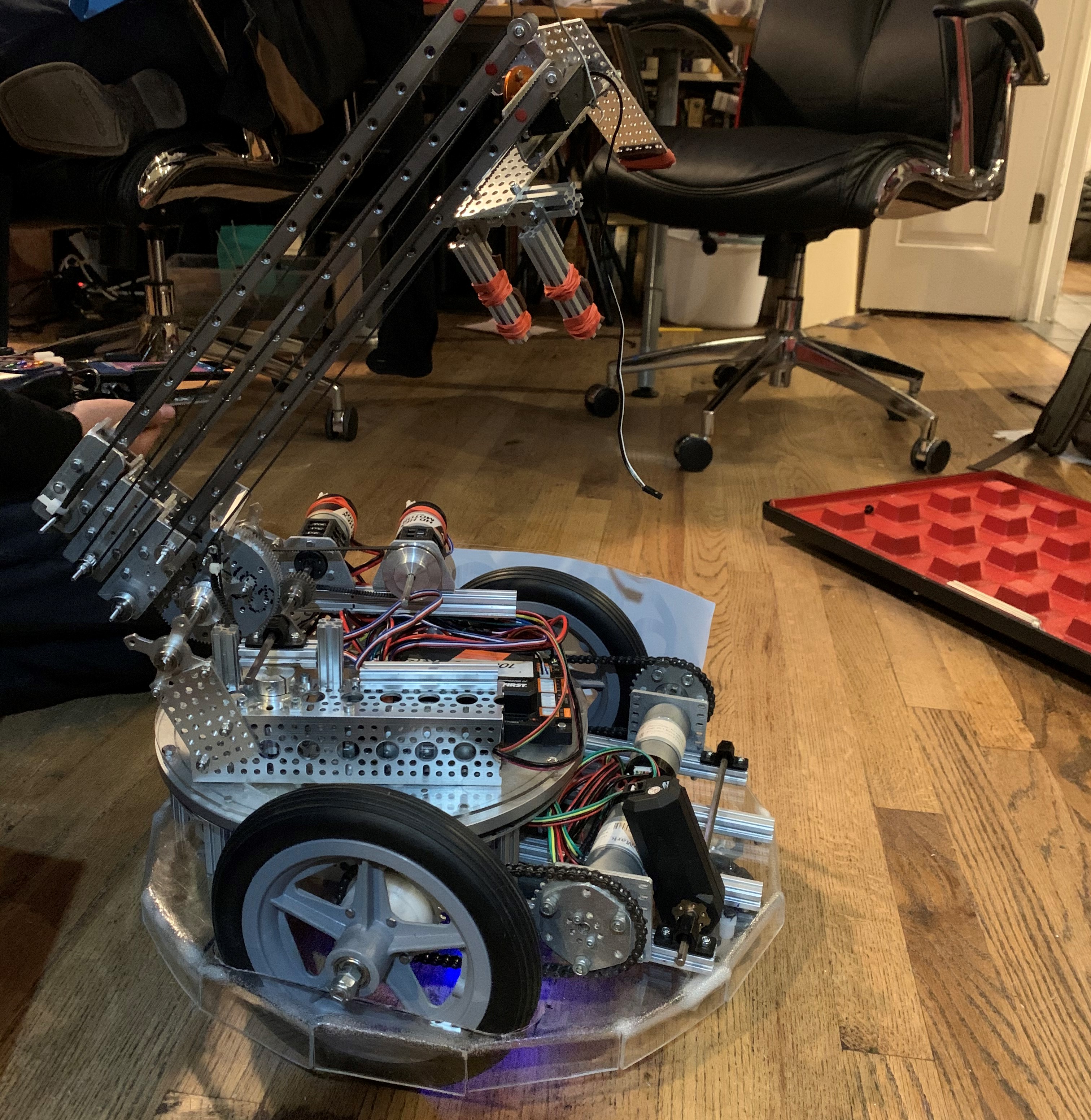 Twas the night before competition and the robot was most definitely not competition ready. This is what usually happens, but once again we found ourselves scrambling around to get everything together before the end of the night. We ended up mounting the gripper, setting up the belts, making hooks for the foundation and of course a whole lot of minor fixes and adjustments.

Mounting the gripper was actually something that we completely finished at competition, however the night before we decided the previous mount would work. Although ingenious, the previous mount would have been to wiggly and not reliable. We ended up opting for a less simple design, however more stable and efficient. With the design we came up with, we realized we still wanted a degree of rotation on the x axis so that when stacking, gravity would automatically align the stone to the rest of the presumed tower. We achieved this in the simplest way by having two c shaped bars connected by only one screw in the middle on either side, allowing it to move back and forth.

The belt was probably the most difficult part. What we needed to mount the belt was a piece that went up and over the rest of the slide then back down the other side, in order to have an attachment point for the end of the belt. This piece would be attached to the back of the top slide, and would be the highest point of the robot, which presented its own challenge. We needed this part of the robot to be able to fit under the bridges, and couldn’t make it go over not even just a bit or it would get caught and ruin the whole game. We tried constructing this piece by drilling a line of holes into the section of the metal we wanted to bend, making it weak enough to bend, however that ended up in just breaking the metal. We then decided it would be much stronger if we used the already bent L channel and just used two of them attached opposite ways.

The hooks for the foundation were pretty last minute and ended up not being very functional. This resulted in us immediately changing them when we got back from competition. The hooks we had at competition were two polycarb L shaped pieces the simply would rotate downward. We mounted them onto and axle driving by a core hex motor. The main issue what that they didn’t have enough contact area to the foundation and we couldn’t effectively move it. We also realized that if we wanted to efficiently move the foundation, we would need to be able to rotate it, which would require contact from the back as well.

With the robot completely (mostly) built for our first qualifier of the season tomorrow, our next concern is driver-practice. As of now, we have no drive practice so this is something which we will be trying out for the first time this season with TomBot tomorrow on the practice fields.