Task: Compete in Qualification Matches and maybe some Playoffs 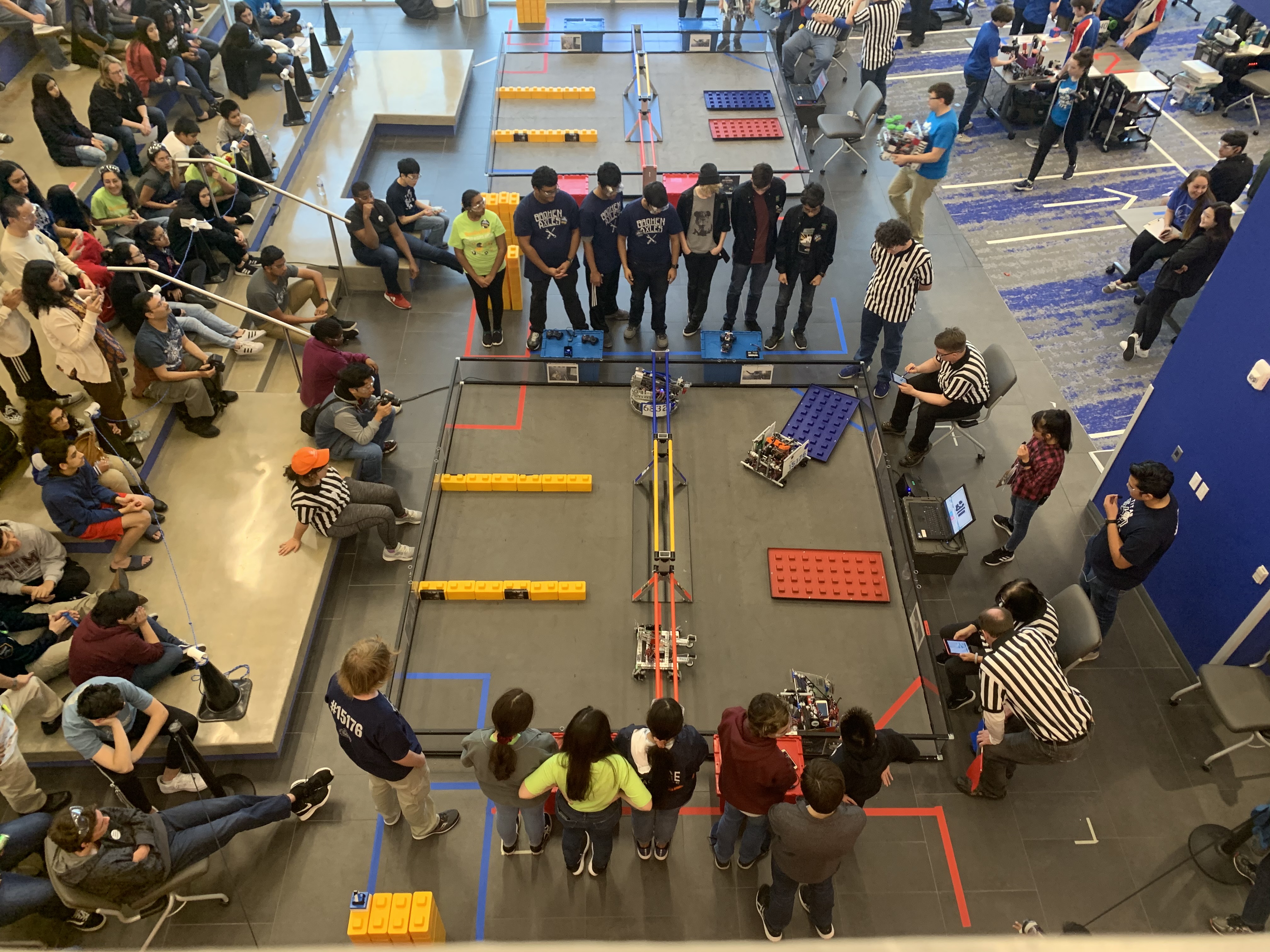 Today was our first qualifier at the Allen STEAM Center and we were able to compete with our official competition robot, TomBot, at the event. With its build being done the day of and its code also minimal, we didn't have high hopes coming into this competition in terms of robot game. Nevertheless, the following ensued. For reference, we have a separate post underlining the analysis of the qualifier that does not include match analysis. This post merely details how each one of our matches went, and we will have a future post discussing our drive issues at the competition.

We lost 113-36. This match was a though one against 7172 Technical Difficulties, who managed to almost set a new world record alone. We had no autonomous at this point and very little driver practice led to our low score.

We lost 5 - 29. Early on in the match the wires that control the entire arm of TomBot were caught on the team number side shield, making the bot virtually unusable during the rest of the match. (insert sad face here)

For the second time in Iron Reign history we tied 10-10. With still no autonomous at this point we had an early disadvantage and to make things worse, the servo that controls the stone grabber disconnected, making TomBot a pushbot for the rest of the match.

We won 29 - 38. In this match we got to play with our sister team 3734 but against our other sister team 15373. Despite never practicing together before we had great synergy throughout the entire match and even pulled off a double park at the end.

We lost 36-50. Our luck ran out here despite the improvements shown in the last match. We were able to run a ten point autonomous with 15204 but our opponents closed the gap during Tele-Op.

We finished the qualification matches seeded 22nd out of 28 but that didn't stop us from asking the 3rd seed, 11629, if they would like to have us in their alliance, after a quick discussion they said they liked our bot and added us to their list. This ended up working out as we were their 2nd pick during alliance selection.

We won 58-38. This was a great match where our autonomouses combined scored 20 points. From here we used a feeding strategy where 15176 fed us stones while we stacked them. During end game we also managed to get a double park. 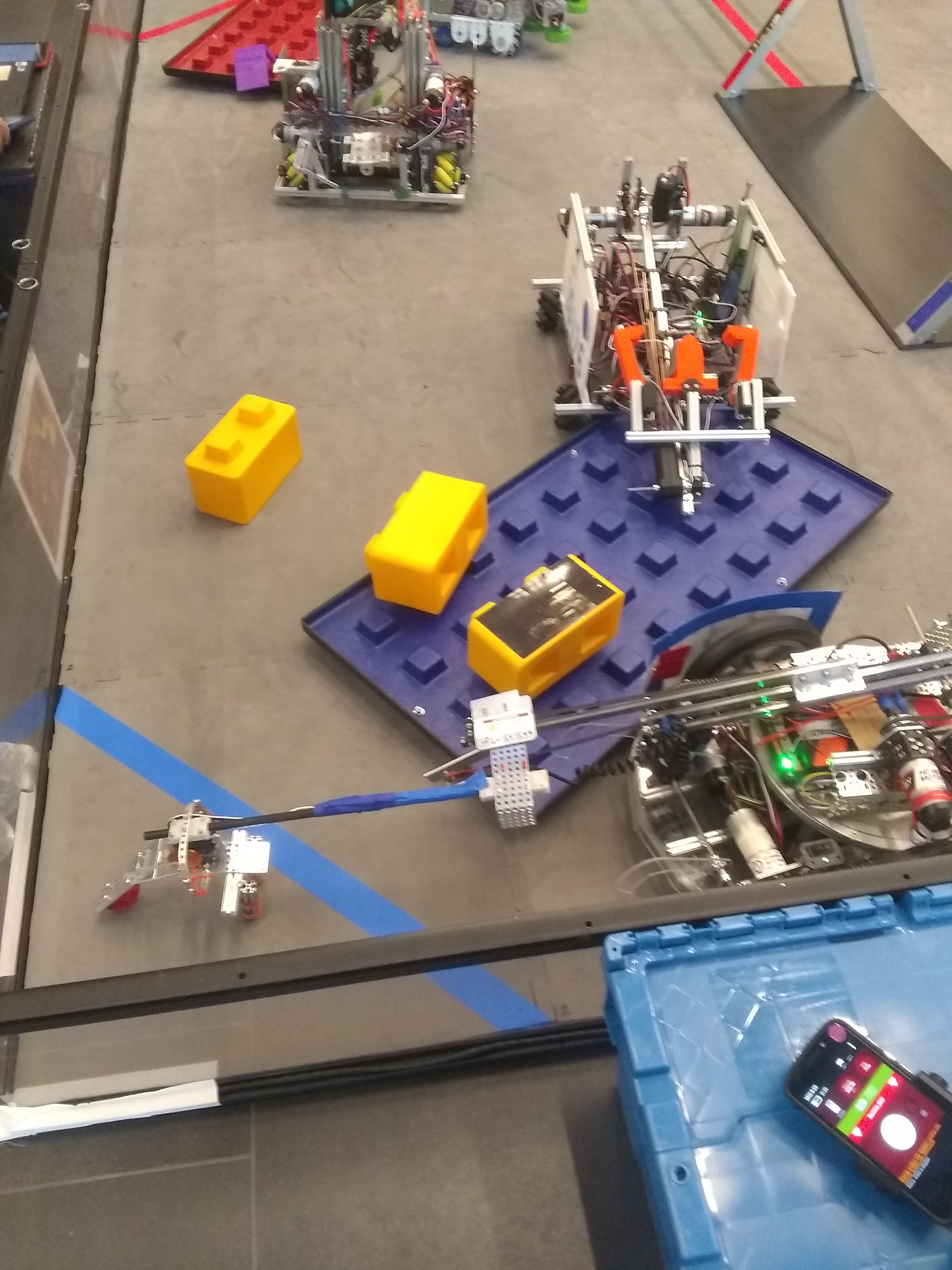 We won 48-28. In this tense match against the 1st seed alliance we were able to do our 20 point auto again and executed the feeding strategy like before. During the end, however, a quick attempt at a park caused the tower we build to fall, but luckily so did the opponents' stack.

We lost 38-86. Both our autonomouses failed which resulted in some time wasted during tele-op to push the foundation to the building site. We were able to pull off the normal tower we build and double park, but this wasn't enough to overcome 7172's and 9161's massive lead.

With so little driver practice done ahead of the qualifier, we hardly expected to receive the Finalist Alliance award but the opportunity to compete in the finals match allowed us to analyze what code and build changes need to be made to our robot to put us in good shape for our next qualifier at UME Preparatory Academy on January 11th.