Right off of a subpar performance at the Woodrow Wilson Scrimmage, Iron Reign walked on shaky ground to the qualifier at the Allen STEAM Center. In the 2 weeks leading up to the tournament, Iron Reign worked hard, with countless changes to our blog and robot. Despite this, we had virtually no driver practice for the qualifier, and did not expect to do exceptionally well at the competition. 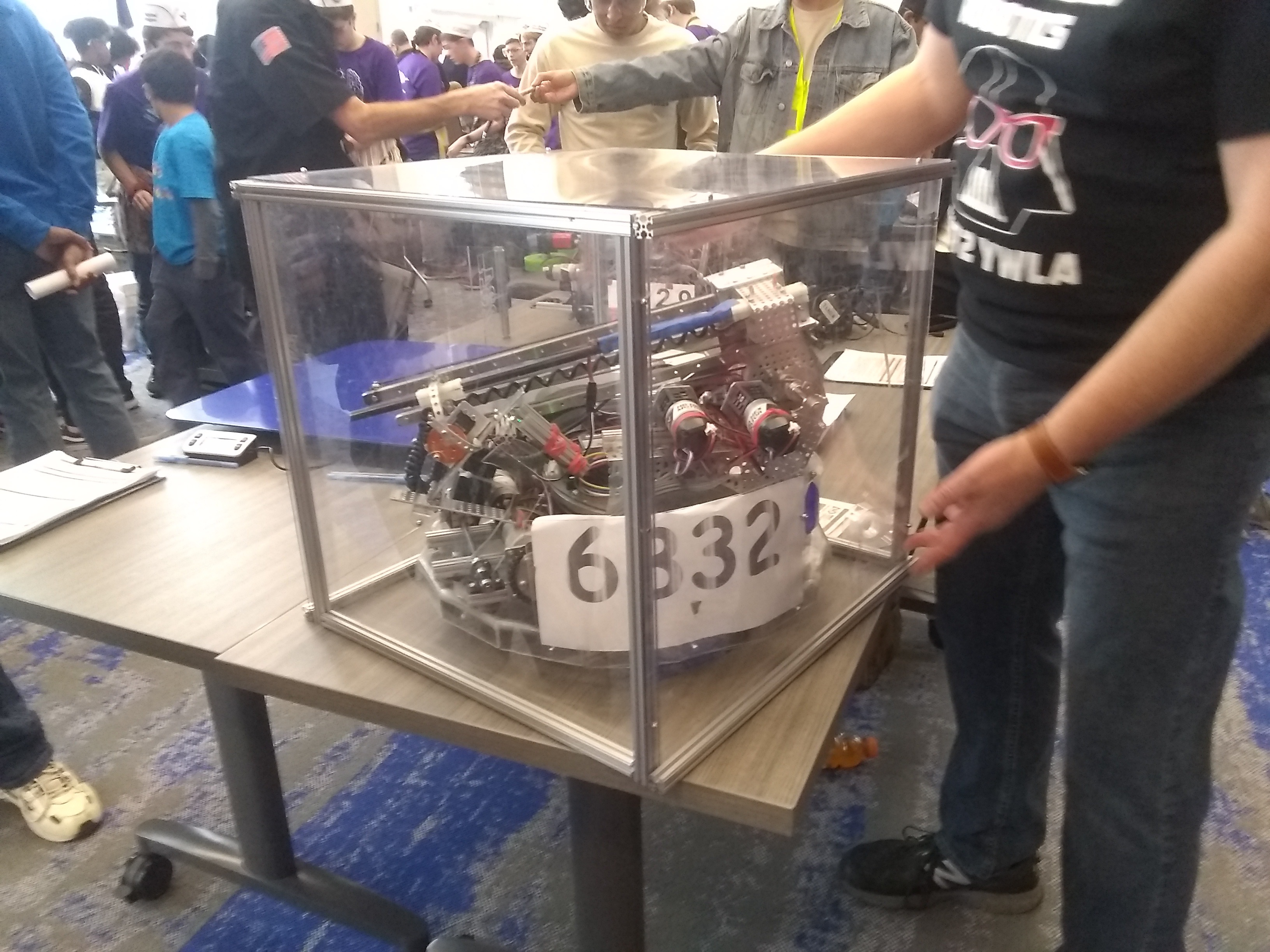 For possibly the first time in Iron Reign history, we passed inspection the first time around! Our robot fit well within the sizing cube, though we will need to improve our wiring management after the qualifier.

We walked in, and started off out strong. Half of a good presentation is the energy, and we certainly had a good amount of energy going in. We were also able to finish our presentation within the 5 minutes allocated, which gave us more time for questioning. Unfortunately, during our robot demo in the questioning demo, one of our chains slipped which meant that our demo was not as successful as it could have been. The plan for the robot demo was that while the turntable rotated, the circular chassis would rotate in the counter direction. However, the slip-up with the chains also took away time from our questioning, so we were unable to convey our information as effectively as we could have.

To start off, we didn't really have a working robot. However, as the day went on, we were able to make additions to our robot that eventually rendered it capable of being picked for a semi-finalist alliance, and from there, advance to the finals. For reference, this is merely a summary of the entire day, and does not serve as our match analysis. The match analysis has been documented in a separate article.

We lost 113-36. With no autonomous, and little driver practice, we were no match for our opponents.

We lost, 5-29. The wires on TomBot got caught on our side shields, rendering us useless for the rest of the match.

We tied 10-10. We still lacked autonomous and we were basically a pushbot for this match.

We won, 29-38. Our autonomous wasn't solid, but both us and our alliance (our sister team, Imperial Robotics) were able to double park.

We lost, 36-50. We had a semi-working autonomous, but our tele-op performance wasn't enough to catch up to our opponent's.

We finished qualifying matches in 22nd, but talking to the 3rd seed team Todoians prior to alliance selections, helped us secure a place in their alliance for semi-finals.

We won, 58-38. At this point, both us and our alliance partner, Broken Axles had a working autonomous and were able to double-park at the end of the game.

Through our performance in the semis, we qualified for the finals matches!

We won 48-28. Although our autonomous worked well, both ours and our opponent's towers collapsed, which led to a low point win.

We lost 38-46. Both us and our alliance's autonomous paths failed and although we double-parked, our opposing alliance took the lead.

In summary, although we did better than we expected robot game-wise, there is lots of room for improvement that we will work on over the weeks leading up to our next qualifier.

While we thought we hadn't done well in judging, we were quickly rebuffed. A good measure of judging success is if the judges come back to talk to you, and this was no exception. We had four separate groups of judges come up to us and ask us about *every* component of our team, from business, to outreach, to code, to design.

In the ceremony, every single member of SEM Robotics waited. Iron Golem had been the 11th place ranked team; Iron Core had been the 16th - both impressive ranks for rookie teams at such a competitive qualifier; Imperial had been the 2nd seed alliance in semi-finals; Iron Reign had multiple in-depth discussions with judges. As award nominations went on, Iron Reign has not been nominated for any of the awards, which could be a good or bad sign. Then came Inspire. We heard two names echo off as nominations; neither of them SEM Robotics teams. Finally, a speech flew across the arena as Iron Reign stood for their Inspire Award.

Even though we won Inspire, we have a long way to go. We are going to compete at at least one more tournament, and we aim to get all 3 of our sister teams qualified. Although 4 teams from one program at regionals is unusual for any team, we believe that all of our teams have the potential to qualify at the next competition on the 11th. In the meanwhile, there will be several post-mortem posts for our performance at Allen, and we hope to analyze our results at the qualifier with both the current and alumni members of Iron Reign.