Task: Identify points of improvement after driving at Allen 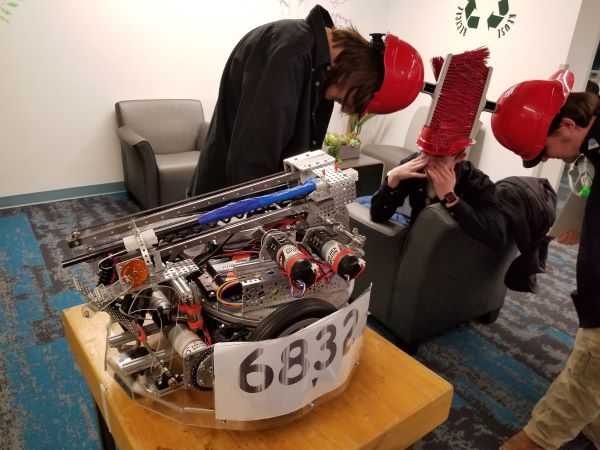 While using our untested code and inexperienced drivers at the Allen STEAM Center this weekend, we encountered many issues while driving. Our biggest issue was with the turntable, which bugged us the whole day. First it was really slow, then it turned but after a 3 second delay, then we finally made it driveable but it turns to the opposite direction a little bit before going the correct direction. This was a problem the whole tournament. The turntable also had runaway, and would drift to either side. To counteract these issues, we maintained a static turntable and used the chassis to rotate. We only needed to spin the turntable maybe twice to extend into the safe zone at the end of the match. We also encountered the claw getting stuck on the side numbers when we rotated it or extended it to the side. We determined the locked straight position was the best for today.

This wasn't a prevalent issue in this tournament, but the robot not being able to drive over the middle bridge could be a problem later on. Driving this robot around the field was so easy. We didn't have to worry about bumping into things and the claw tucked in very well. After about our first match, our coder added preset positions to the controller. This made grabbing and placing blocks very easy, and ultimately displayed the capabilities of our robot to other teams and judges. This also helped us actually score points. The gripper was very basic for this tournament, which was actually helpful as it made learning how to drive the robot very simple. They claw required very little adjustments during the match to pick up stones, and did so reliably. Adding a point of rotation to joint might allow us to pick up weirdly rotated stones. Something we noticed during this tournament was the amount of robots, including ours, that couldn't pick up stones that had been tipped on their sides. Being able to pick up sideways stones as easily as upright stones could give us a unique and very effective advantage over other robots.

Our biggest task is to smooth out the turntable both in code and build. The presets and smoothness of the turning need to be tested and improved. We also need to free up some room on the robot to allow the arm to swing around while the claw is fully retracted. The changes to the arm should be made pretty soon, to allow enough time to drive and test the robot. The chassis issues mentioned earlier are not an immediate worry, but we should continue testing and improving our work in progress suspension system. The suspension, when functioning, will allow us to drive over the middle bridge, which increases our mobility and allows us to perform different strategies during matches. We will prototype a way to rotate the gripper on the arm to allow us to pick up blocks from more orientations. We will also compare the benefit of picking up sideways blocks with the difficulty of picking them up, and determine whether or not that is something worth prototyping.