For this years new season we used an innovative flywheel-based launcher to score the disks into the goal. After 3 weeks of work, we also managed to come up with a name for it - The RingSlinger 9000. Any posts referring to our flywheel launcher refer directly to the Ringslinger itself. This launcher uses the properties of rotational inertia to propel the game pieces along a carefully calculated, fixed trajectory to ensure that the disks have the same launch trajectory every time, allowing both automation and driver control to more simple. The assembly is physically constructed from several sheets of aluminum and one sheet of polycarbonate, modeled by Jose and cut on our CNC mill. The spacers between the sheets are made of nylon due to its high strength and low friction, and we chose to use a custom ninjaflex ring around the CNC milled flywheel to ensure that the wheel could transfer the maximum amount of kinetic force to the disks. The launcher is designed in such a way as to impart rotational energy on the disks, spinning them. This helps maintain a constant trajectory, similar to how an NFL Quarterback spins the football when scoring a touchdown pass, or how the grooving on a rifle spins a bullet, ensuring in-flight stability. In tests, our design proved to be mostly effective, launching disks along a consistent trajectory. Our first firing test was during our video meet with the DPRG, and with a few tweaks, it was performing up to standards. However, there were some issues that needed to be addressed - mainly, we need to complete further testing to see if any of the rings experience damage as a result of our launch, where the general area the rings tend to cluster at, and fine-tuning an equation to model the launch. Correcting these issues will make the accuracy of the RingSlinger that much more accurate. 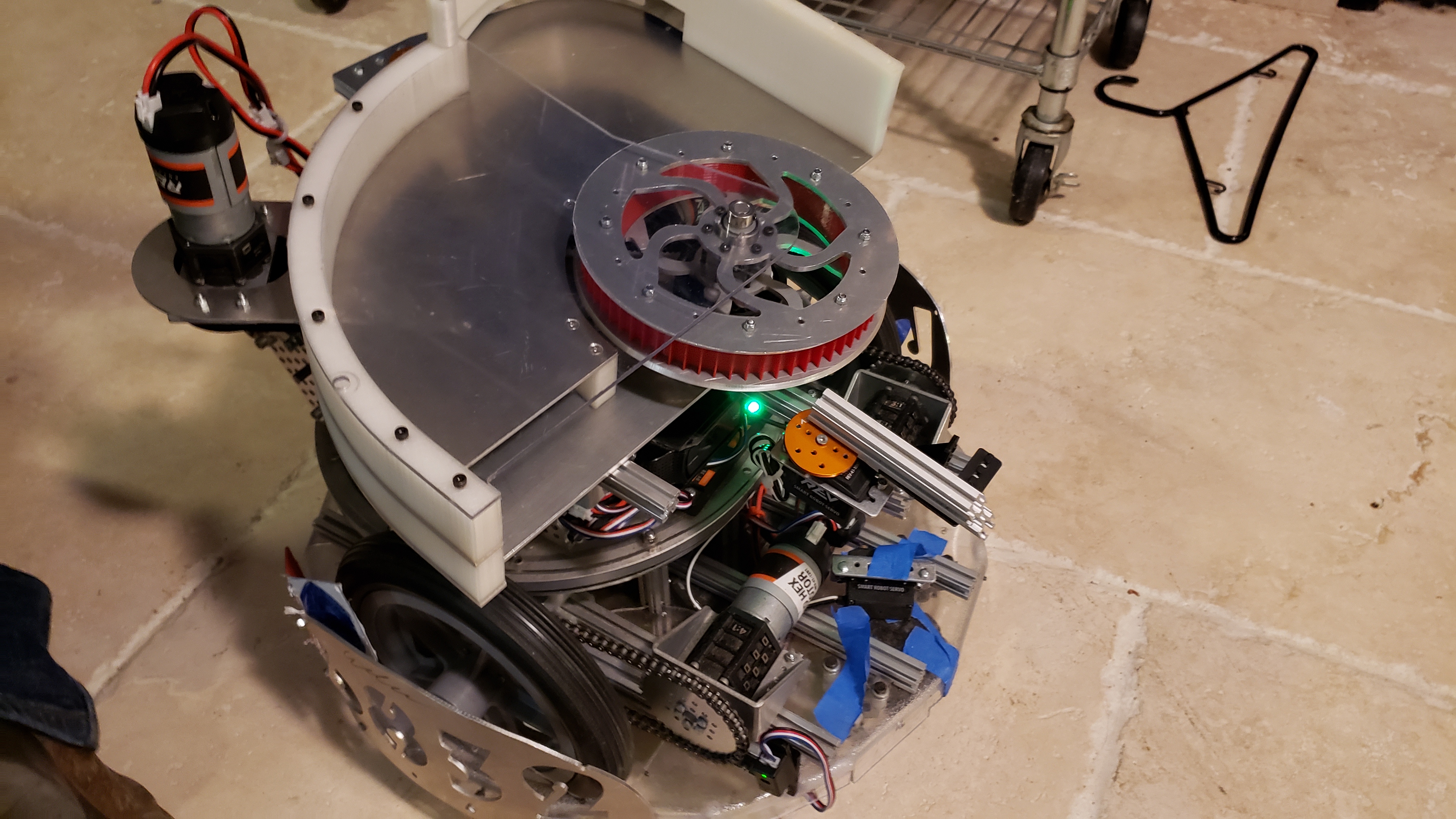 Future plans to expand upon this design include integrating a voltage regulation module, to ensure that the disks are always spun at a constant velocity. In tests, we noticed that as time in a round passed, the drop in main battery voltage caused the disks to be launched at a slightly slower velocity, not enough to phase a human driver, but enough to render automated shooting protocols inaccurate. To remedy this, we will find out the lowest point the battery will reach during the course of a match, and regulate the voltage being fed into the flywheel motor to not surpass the aforementioned "low" voltage during the match.