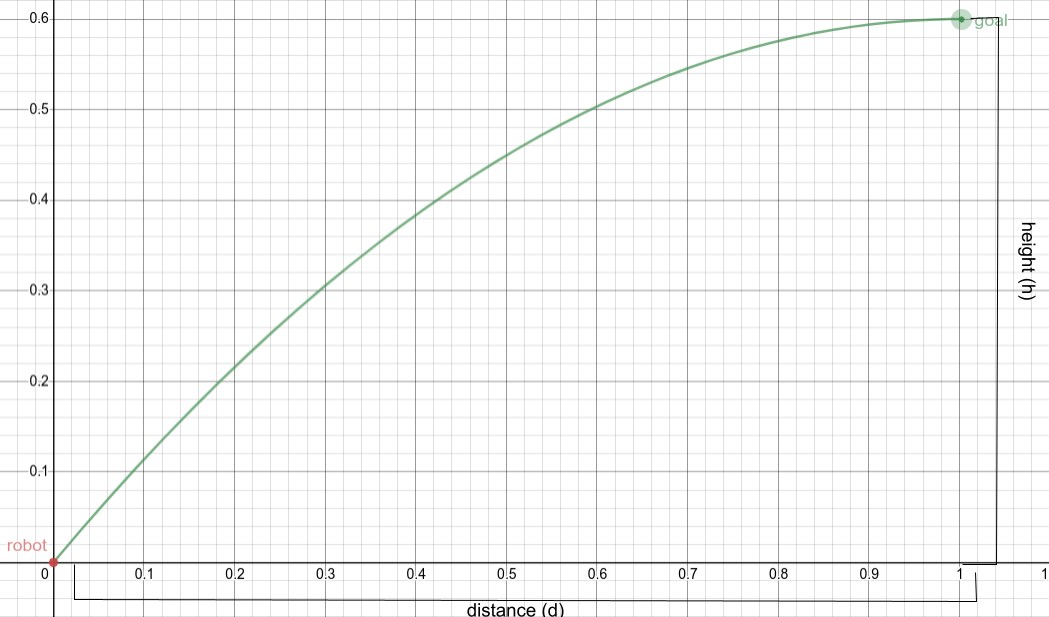 To ease the work put on the drivers, we wanted to have the robot automatically shoot into the goal. This would improve cycle times by allowing the drivers, theoretically, to shoot from any location on the field, and avoids the need for the robot to be in a specific location each time it shoots, eliminating the time needed to drive and align to a location after intaking disks.

To be able to have the robot automatically shoot, we needed to derive the equations necessary to get the desired \(\theta\) (angle of launch) and \(v_0\) (initial velocity) values. This would be done given a few constants, the height of travel (the height of the goal - the height of the robot, which we will call \(h\)), the distance between the robot and the goal (which we will call \(d\)), and of course acceleration due to gravity, \(g\) (approximately \(9.8 \frac{m}{s^2}\)). \(d\) would be given through either a distance sensor, or using vuforia. Either way, we can assume this value is constant for a specific trajectory. Given these values, we can calculate \(\theta\) and \(v_0 \).

However, without any constraints multiple solutions exist, which is why we created a constraint to both limit the number of solutions and reduce the margin of error of the disk's trajectory near the goal. We added the constraint the disk should reach the summit (or apex) of its trajectory at the point at which it enters the goal, or that it's vertical velocity component is \(0\) when it enters the goal. This way there exists only one \(\theta\) and \(v_0\) that can launch the disk into the goal.

In order to be practically useful, the \(v_0\) previously found must be converted into a ticks per second value for the flywheel motor to maintain in order to have a tangential velocity equal to \(v_0\). In other words, a linear velocity must be converted into an angular velocity. This can be done using the following equation, where \(v\) = tangential velocity, \(\omega\) = angular velocity, and \(r\) = radius. \[\displaylines{v = \omega r, \omega = \frac{v}{r} \\ }\] The radius of the flywheel \(r\) can be considered a constant, and \(v\) is substituted for the \(v_0\) solved for previously.

To sanity check these calculations and confirm that they would indeed work, we used a desmos graph, originally created by Jose and later modified with the updated calculations, to take in the constants used previously and graph out the parabola of a disk's trajectory. The link to the desmos is https://www.desmos.com/calculator/zuoa50ilmz, and the image below shows an example of a disk's trajectory.

The next step is to use PID control to maintain target velocities and angles. The calculated angular velocity \(\omega\) can be set as the target value of a PID controller in order to accurately have the flywheel motor hold the required \(\omega\). The target angle of launch above the horizontal \(\theta\) can easily be converted into encoder ticks, which can be used again in conjunction with a PID controller to have the elbow motor maintain a position.

Another important step is to of course figure out how \(d\) would be measured. Experimentation with vuforia and/or distance sensors is necessary to have a required input to the trajectory calculations. From there, it's a matter of fine tuning values and correcting any errors in the system.