We wanted to setup FTC Dashboard for graphing, configuration, vision, and later on, odometry. FTC Dashboard enables graphing of numeric variables, which can simplify PID tuning enormously through plotting the current position/velocity and the target. Additionally FTC Dashboard enables real-time editing of configuration variables, and in the context of PID tuning, this enables PID constants to be edited on the fly. With the later goal of implementing odometry for localization, FTC dashboard can be used to draw the robot's pose (position and heading) on a canvas, to easily confirm the accuracy of our odometry calculations. Dashboard also allows for images to be sent, allowing us to also debug our OpenCV vision pipeline.

We used FTC Dashboard during this coding session to tune the coefficients of our newly created flywheel velocity PID loop. This would ensure that our flywheel would be able to maintain the desired angular velocity we want it to, in order to consistently shoot the disk into the goal using our trajectory calculator. 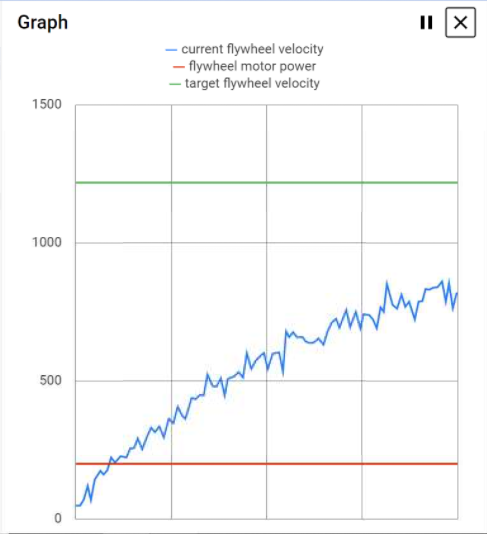 The next step is to harness the power of FTC Dashboard to verify our odometry calculations by drawing the robot's pose information onto the canvas, using vectors/arrows to signify the base's heading, the turret's heading, and the bearing from the robot to the goal. This would point out any glaring errors in our odometry calculations, and would serve to visually represent the degree of error our calculations would naturally experience as a result of slippage and other factors.