Task: Solve minor issues with the robot’s design and code. More drive practice in preparation for the UIL Championship next week.

With only one week left until the UIL FTC State Championship in Houston, we doubled down on our efforts to fix a few small problems that remained in The Reach, as well as prepare for the State Tournament. Specifically, we had to finish constructing a new duck spinner that could extend farther out, and fix minor difficulties in the code of the robot that was messing up the positions of the crane during gameplay.

There were a couple of key issues with the old duck spinner that led to the development of an improved version, which Trey designed and constructed. The old duck spinner was too short to reach the duck carousel when the gripper was lowered and in an intake position and the drivetrain for the duck spinner motor was not very good. Trey designed and 3-D printed a new motor mount that allowed the spinner to be directly driven by the motor. To address the length issue, the entire mount was attached to a carbon fiber rod. This new system allows the hot swappable duck spinner to extend further out and work in tandem with the beater. We managed to mount the duck spinner by the end of our meeting. 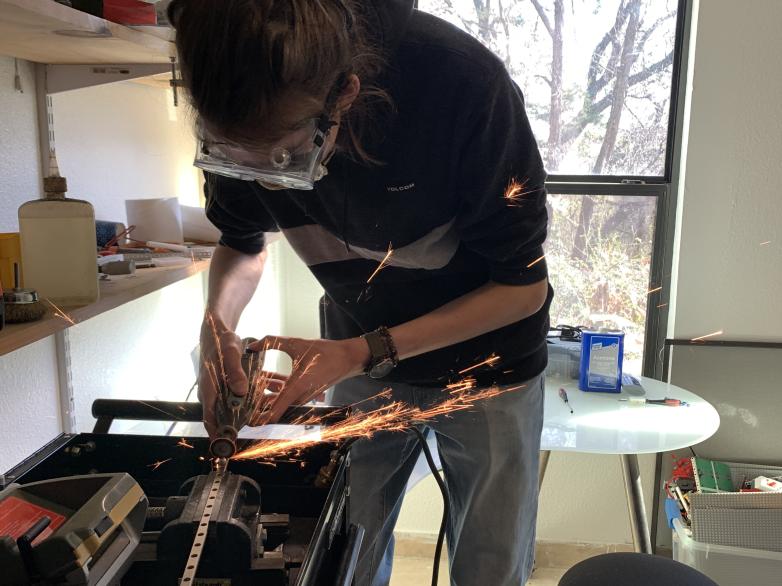 Remember to use safety glasses kids!

There were a couple of structural and wiring issues with our robot that needed to be sorted out in order for the robot to function properly. On the bucket, the distance sensor that allowed an automated transfer system and automated drop off was re-wired to ensure that it didn’t unplug during the robot’s motion. This allowed for the proper transfer of freight from the beater to the bucket. Then, the servo for the second gripper beater was properly wired to make sure that the gripper could intake freight into the gripper properly. Finally, the magnets used to score our team shipping element were reattached so that we could lift FFUTSE’s and placed them on the alliance shipping hub.

We recently added a new shoulder servo for the crane, and we worked today to help integrate it into the code and fine-tune it. We also dealt with an issue with the code that caused the crane to turn only to the right during freight drop-off.

Bhanaviya, Anisha, and Shawn worked on documentation posters for the UIL State Championship to submit for the awards at State. Bhanaviya worked on the engineering and design posters that highlighted how we developed and designed our robot. Shawn completed the innovate poster, which showed how we thought outside the box and created an innovative design. Anisha worked on the connect and motivate posters which displayed how we connected with industry professionals to improve our robot and how we spread robotics and opportunity to our community. Shawn also worked on designing our pit layout for UIL. 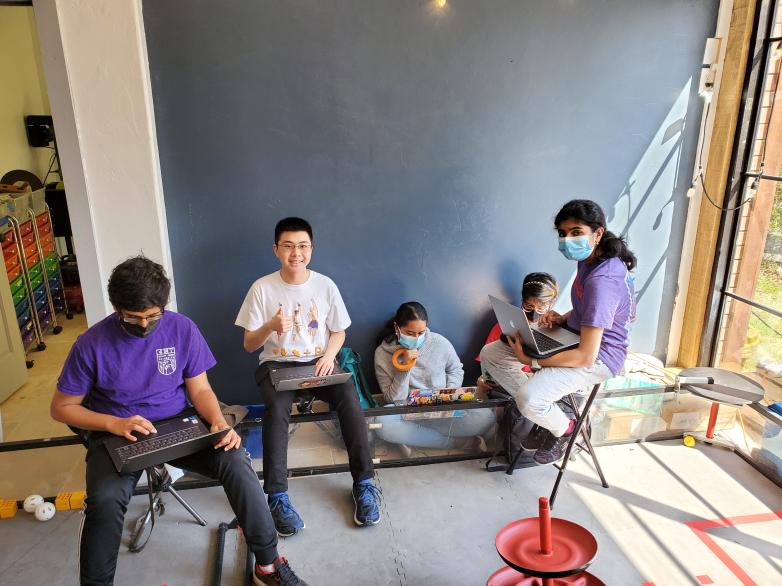 More drive practice. Don’t destroy the robot in the one week before State. Try and not have to pull an all-nighter the night before competition. Continual maintenance and upkeep of the robot would be useful to make sure the robot still works in a week. Documentation will also have to be finished and finalized in the coming week in preparation for UIL.