Overall Progress From the Past Two Weeks 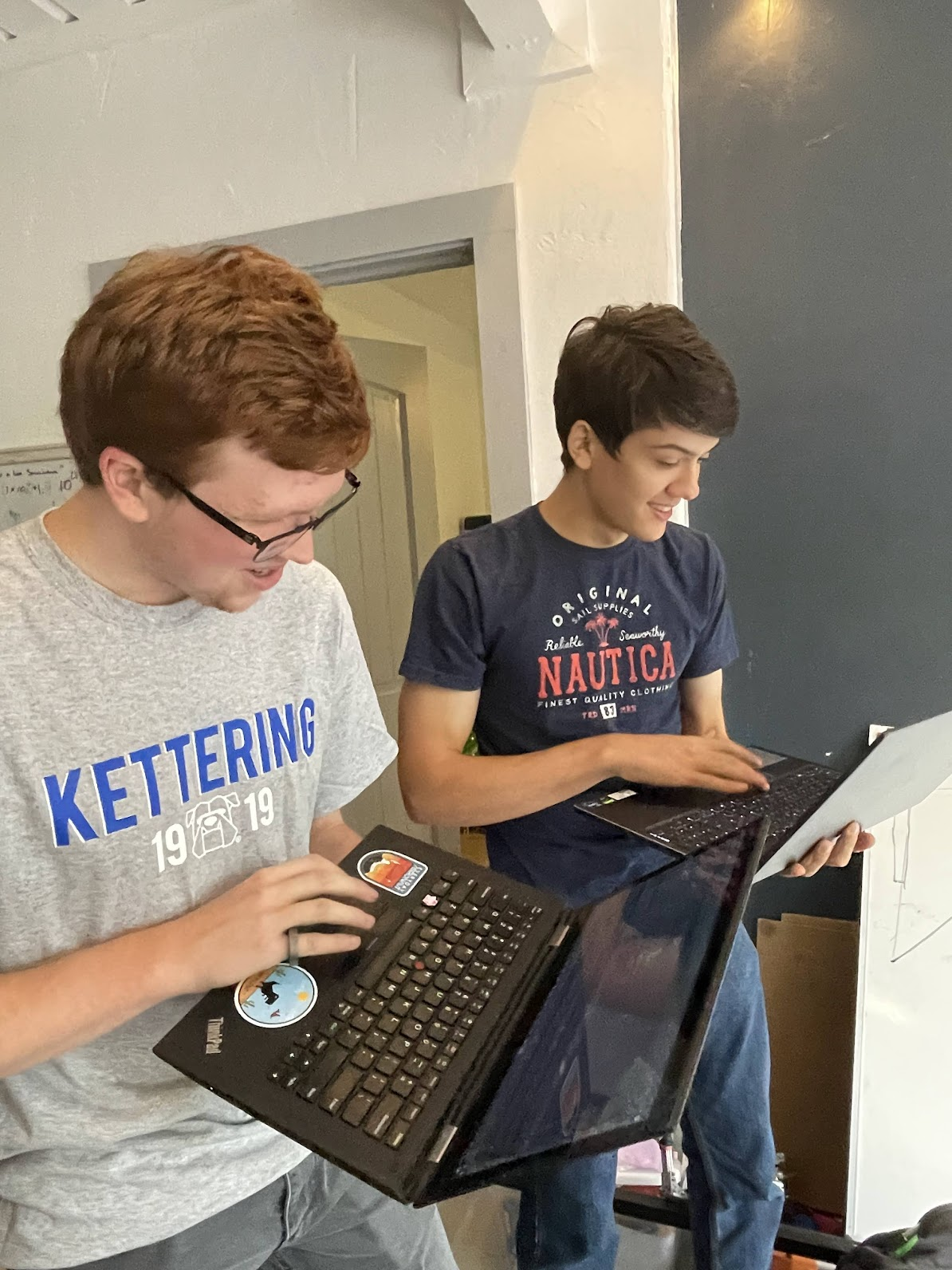 Our main coders, Vance and David, have continued working on reqriting the code base to make it easier to understand. We have many new recruits on our sister teams who are interested in learning how to code, so a lot of time has been spent on making the code base more user-friendly.

One major issue we were having is that there was a lag between operating the robot and the robot function. While scouring the code to find and address the problem, we noticed that there was a 1 second loop time. By eliminating this loop time, which may have initially been added to add a buffer period, our robot began to work much faster and was far easier for our drivers to operate. We also added custom PIDs for the turret and crane, giving us smoother movement with controlled speeds.

The coders are also working on using different methods of path folowing, such as straight orthogonal line following versus Pure Pursuit, to determine which would be the optimal method. Straight orthogonal line following would be far simpler to use and code and is already well aligned with the field set up and game design for Power Play, while Pure Pursuit is more often used in collegiate-level robotics and is a common path following algorithm. Once you get it right, it is very reliable and can be manipulated well.

We hope to get the path following and code base overall testable as soon as possible so we can work through specific motions and rotations as well as making it easier for our drivers to get in more practice before the first league meet. 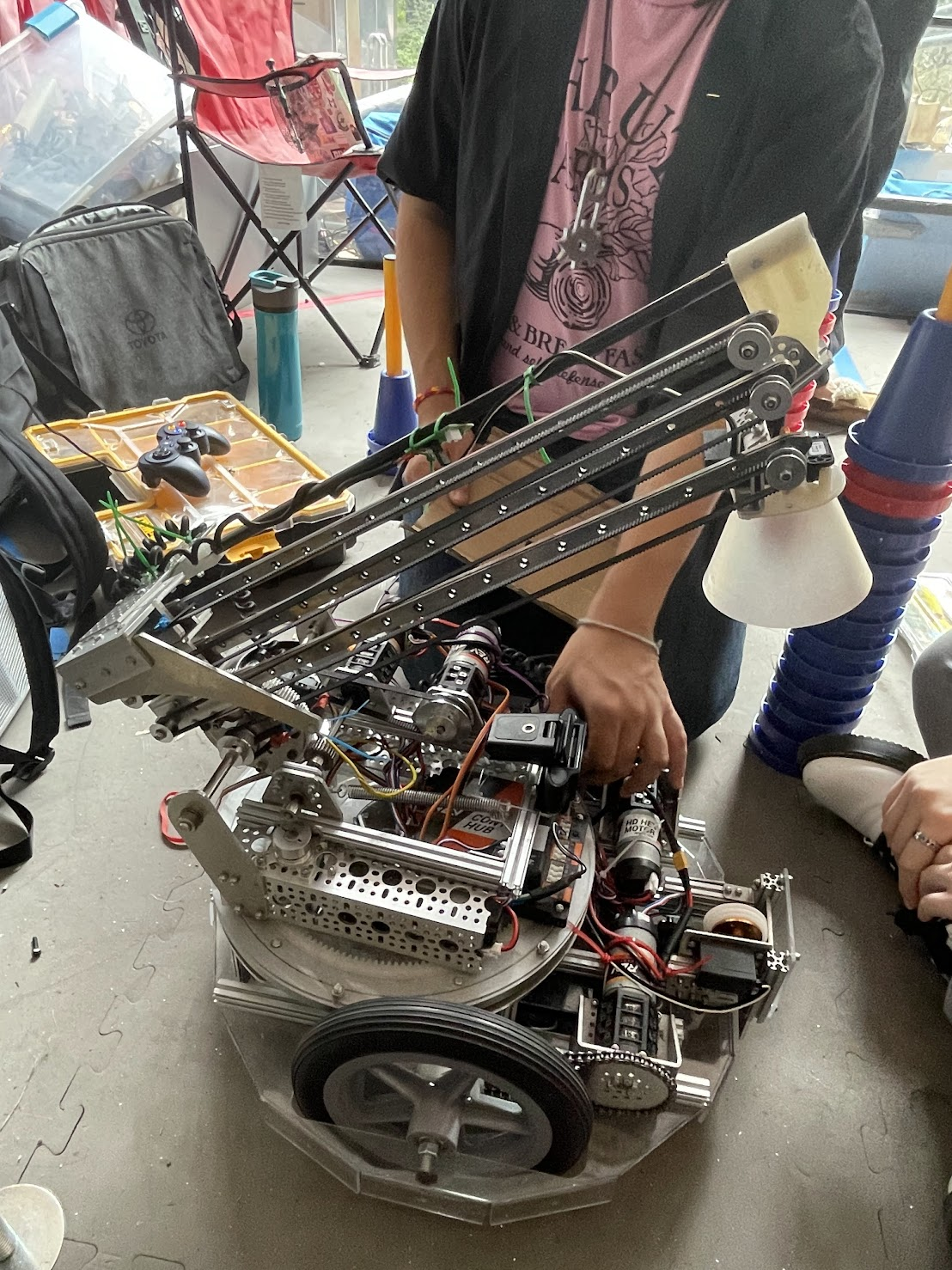 One of the major components of our robot is the extension of the arm, which enables us to reach even the tallest of poles with no difficulty. However, the set screws on the pulley system, which control the arm extension, were very loose, caused the axle to come off and render the whole arm useless. The first thing we did was tighten the set screws and work on many of the other regular repairs which were needed to keep the robot in optimal working condition.

Our robot uses a coiled extendable wire to operate the servo which controls our gripper system. However, due to the length of the wire, it got in the way of a lot of robot function and was just inconvenient overall to work around. We created a simple cardboard prototype to set our extendable wire so it wouldn't inhibit the rest of the robot and would allow all functions to occur freely.

So we would be able to automate the process of depositing cones, we installed a webcame which allows us to see how far the arm is extended.

Our gripper system needed a way to conveniently attach to the arm, so we had to create a component which would attach and align the gripper system properly. The gripper system has 4 main parts: a distance sensor, a servo, an expandable bulb and a cone guide. The component, appropriately named the Servo Clamp, was designed to be able to attach the bulb, servo, cone guide, and distance sensor separately while also aligning them so the robot would be able to use the sensor to detect the cone and pick it up using the bulb and cone guide.

There are always more improvements and more progress we can make in code, and we also need to make a separate intake system for the cones because it's more efficient and would allow us to score more points quickly. We also want to rebuild the robot piece by piece to make it more resilient and fix each individual aspect.