Task: Finalizing the Robot the Day Before Competition

The day before a competition always sees arguably the most productivity from all the teams in a rush to finish up what they hope to accomplish the next day. For Reign, this was getting autonomous working, final drive practice for Georgia, and the printing of the team beacons.

The first few hours were filled with commits from both David and Vance in an attempt to get the April Tags basically perfect. The camera was able to read the tags only some of the time due to the oscillation of the arm after calibration, which would be frequent at low voltage levels. Fortunately, this was solved and the rest of the night was spent on simplifying the calibration sequence and PID tuning for the arm.

A few practice matches were run which included both autonomous and TeleOp with a timer to see our limits. The average performance saw autonomous working and around 3-4 cones scored, but some outliers saw no autonomous points and no cones scored, which was certainly worrying. In the end, further drive practice was sacrificed in order to get the autonomous code working.

Making and Dying the Beacons:

The final thing we finished that night was the beacons for additional scoring. This was modeled as a loose sleeve that fit around the cone initially, but then we cut around it and made just a tab protruding from the base in order to meet sizing requirements, as well as dying them red and blue respectively and writing the team number on them. 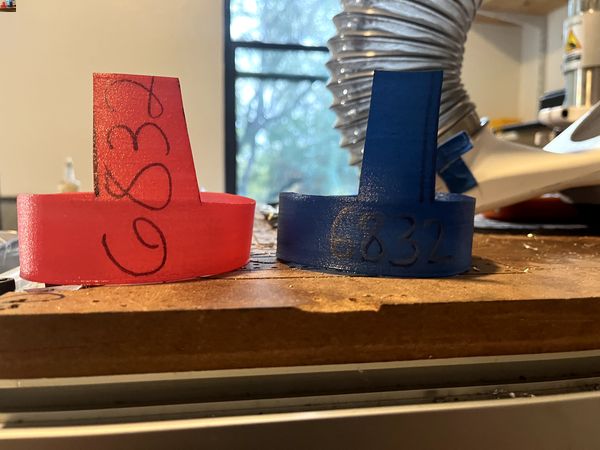