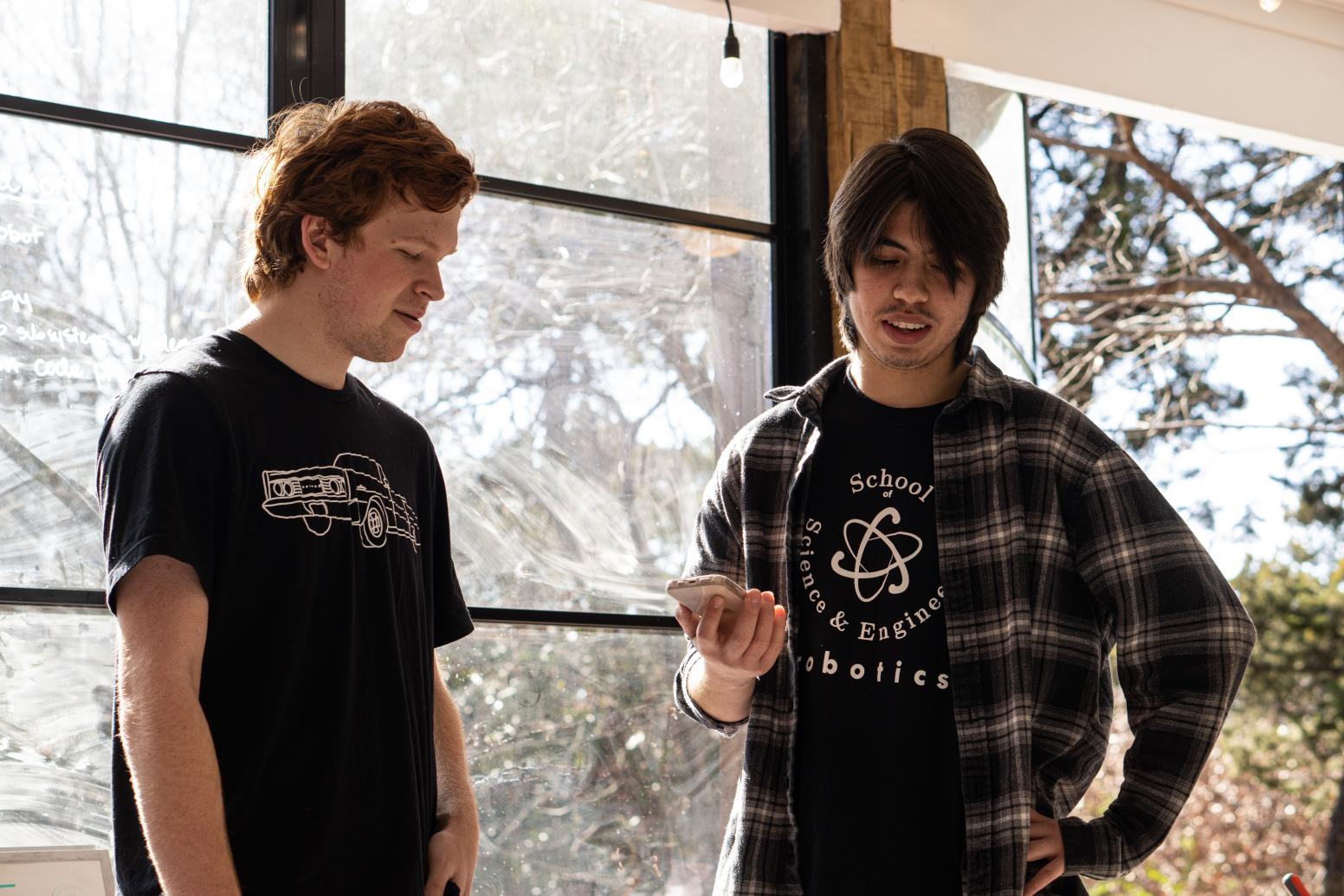 You can watch our full presentation here. Today was our second meeting with Dallas Personal Robotics Group , or DPRG, this season. We updated the engineers at DPRG with our build and code progress. First, we ran through our newly assembled parts and subsystems. Then we showed our work in progress CAD in Autodesk Fusion 360 directly, and our main coder ran through our code. Finally, we had time for a small Q&A session with the engineers, where they asked us questions about our robot design and how it would achieve the goal put forth by the playing field.

We had 3 main things to discuss when it came to newly assembled parts and subsystems: the new wheels and the underarm/chariot, which included the lasso gripper. Gabriel introduced the new wheels, which are made out of carbon fiber, nylon and ninjaflex. We also demoed the new wheels, which had just been attached to an axle. Because the bearings weren't aligned properly, the wheel was slightly wobbly. However, it was a good demonstration of how the wheel would work when it would be attached to the second iteration of our robot, Taubot. We changed to a custom wheel because it would give us more control and would also be slightly smaller than the old wheels, allowing us to optimize the design. 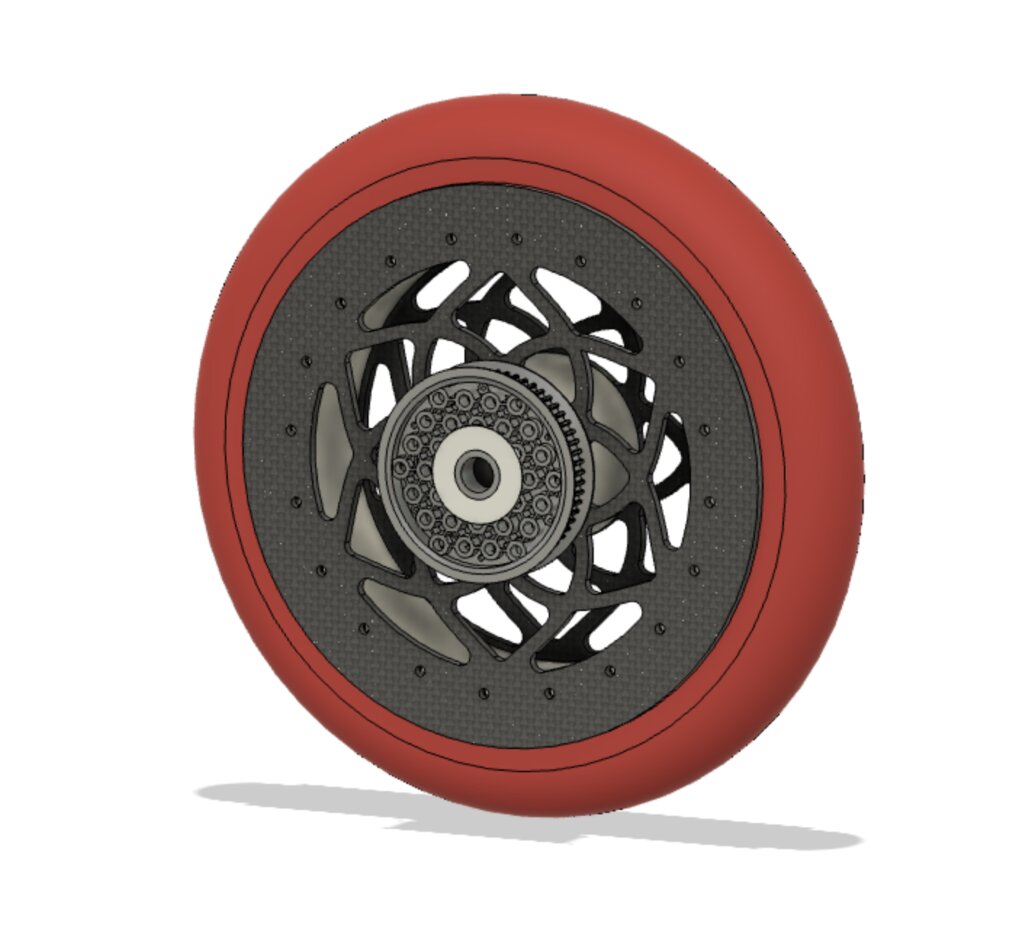 Leo, who was the main designer behind all aspects of the underarm/chariot, was responsible for introducing it to the judges. Our underarm is designed to slot into the front of the robot, replacing the omni wheels with driven omnis which drive out the chariot. Our underarm is entirely made out of custom carbon fiber parts, and will be the intake system for Taubot: 2nd iteration. The chariot drives out, using the driven omnis, to the cone stacks and the substation. The underarm uses the lasso gripper to grip around a cone and passes through itself to hand the cone off to the main arm. 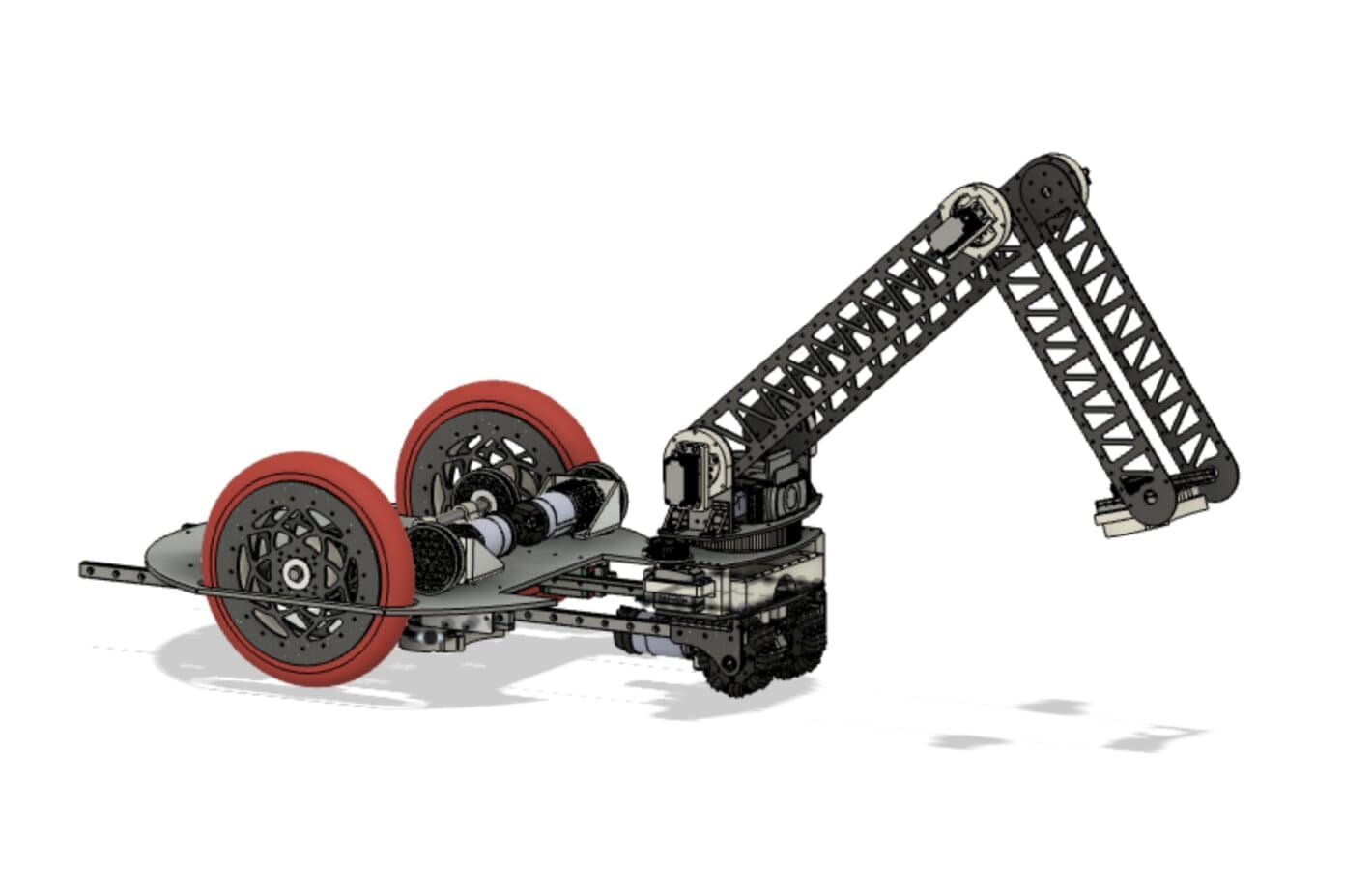 After displaying the custom parts of the robot which we had already assembled, we showed the parts of the modeling which were still in progress. I started by introducing the shoulder and turret assembly, which was still very much not completed. I talked about motor placement and gear alignment, and why we changed the design of the shoulder and turret. We wanted to stop using the standard REV rails and replace them with aluminum plates, which would be stronger and designed specifically for our purposes.

Trey showed the changes we would be implementing with the arm. We changed the linear slides to a lighter model so it would be possible for us to add a 4th stage. This would make it possible for the robot to move minimally and still reach the entire span of the field. We are using a belt system and a motor at the base of the arm to extend the arm. Trey then showed the base and the chassis of the robot. He talked about how we changed the design, and how we would be using carbon fiber for the base as opposed to polycarbonate, because of how much stronger carbon fiber is and because of the issues we were having due to the polycarbonate cracking when it hit the walls of the playing field.

Leo showed the model of the underarm and the chariot so the engineers could get a better understanding of how it would extend and operate. He also talked about how the battery would be in the moving section so we could counteract the tipping problem due to the weight of the arm.

We also touched on our manufacturing process, and how we turned modeled parts into physical parts which would be used on our robot.

Vance took the lead on showing what he'd been working on with code. The auton wasn't fully tuned up so everything was slightly off. In an ideal autonomous game, we would have gotten around 3 cones. Currently, reliability is a bit of an issue because of cone placement, because cones are very close to the wall. This makes the margin of error we have very little. The robot tipped over while we were trying to demonstrate autonomous, but it was an easy fix, along with a reset.

The first thing Vance demonstrated was the scoring patterns. They were a very new addition, and they were good for drivers because it meant the drivers would only have to make a few micro adjustments to the arm placement instead of moving the arm the whole way around the game field.


The arm gets pretty close, but the driver has to line it up perfectly manually themselves. The reason we go to a different pole every time a new cone is picked up is because that gets us a lot of poles, which results in possible points for controlling poles. Each cone which is controlled is 3 extra points. This is very helpful strategically. There are 8 scoring patterns, because there are 2 cone sources. The driver can swap between any of the scoring patterns mid-match.

While we were demonstrating scoring patterns, a pulley on the robot fell off. This took a while to fix, but the show must go on!

The PID brings the shoulder to the correct angle at the correct speed and time. Our robot now uses feed forward, which calculates how much torque is on the arm and how much torque is needed for the motor to hold position or counteract the torque of the arm/gravity. This is entirely based on the current angle and position. If we fully extend the arm using PID but not feed forward, the arm would always slip down slightly. However, now the arm holds position, even when it's fully extended.

The last portion of our meeting with DPRG was the Question and Answer session. The engineers asked us questions about our design and the game itself.

Q. Why do you score during autonomous?
A. We get double the points for every cone we score in autonomous, because it counts during both autonomous as well as driver control. We also get 20 additional points for parking the robot, which is quite reliable.

Q. How many of you design the robot?
A. There are 7 total people on the team. 3 of us model, and we mainly communicate through Discord and TickTick to divide the work. We also have design meetings to find mistakes in our models and discuss what needs to be fixed. Subsystems and different assemblies are organized into folders, and we each take responsibility for one main part. To sum it up, it's organized chaos.

Q. What is the scoring estimate/target with the new pattern?
A. We don't have one with the current pattern, because we don't have any testing. We got 8 - 9 cones with the old pattern.