I lost the photos and video of grishnakh long ago. It was an overly powerful and ugly 6 wheel rocker bogie outdoor platform meant to scoop the poop from our 3 dogs. This began roughly in the 2005 timeframe - inspired by Spirit/Opportunity. It had a mini PC on board and the beginnings of a "dropping detector" vision pipeline. The robot resisted testing because, well because... The sluggish project outlasted our dogs and ultimately the motivating conditions. The less said the better.

Minion was a mashup of a 1/12th scale rock crawler and a LEGO Mindstorms NXT controller built in 2012. It also had an android phone in front purely to supply a "friendly face". It was steered with a leash and used an ultrasonic sensor in front to avoid running into obstacles. It was conceived as way to motivate residents of pet restricted nursing homes to walk outdoors.

Argos is an outdoor rover built from a 1/5th scale rock crawler. This is the second rock crawler the team experimented with - the first was a smaller robot named minion tasked to "walk people". The hope was to enter Argos into a robocolumbus event but the FTC season always gets in the way. This is the earliest 2015 version where my sons and I are experimenting with autonomously tracking a 3d printed target using OpenCV running on an Android phone on a pan/tilt mount. The hardware is controlled by a ioio board. Here it's simply traversing a lawn following a target, but it has no trouble with curbs. The phone simply tries to keep the center of the color blob close to the center of the screen by pan/tilting itself, and the steering is simply turning in the direction of the pan. The robot maintains distance by computing the variance of the current distance from the distance when it started tracking. If it's too close it will back away and too far will try to catch up with the target. Think of it as a dog heeling. The operator identifies the target at startup by touching it on the screen and the pixels under the touch are sampled.

We've also used it as a selfie robot in public demonstrations where it would take and share pictures of people who interact with it. Most kids over 4 years are quite happy to play with it and perceive it as vaguely dog-like. Here Argos is tracking a kid in an orange t-shirt (steering broke while this was happening):

The team iterated Argos to V2 in 2017 when it was converted to the REV Robotics control system as the ioio board began to wane. We upgraded our visual tracking to use Vuforia and we added rear steering to sharpen it's very large turn radius. This is a 5 minute about video:

We've taken this robot to South Padre a number of times and it navigates the sand fairly well under a variety of conditions. But this is also where it had a run-in with the Gulf waters. The Gulf won. Argos be rusty now. Lost the vids but here is a photo. 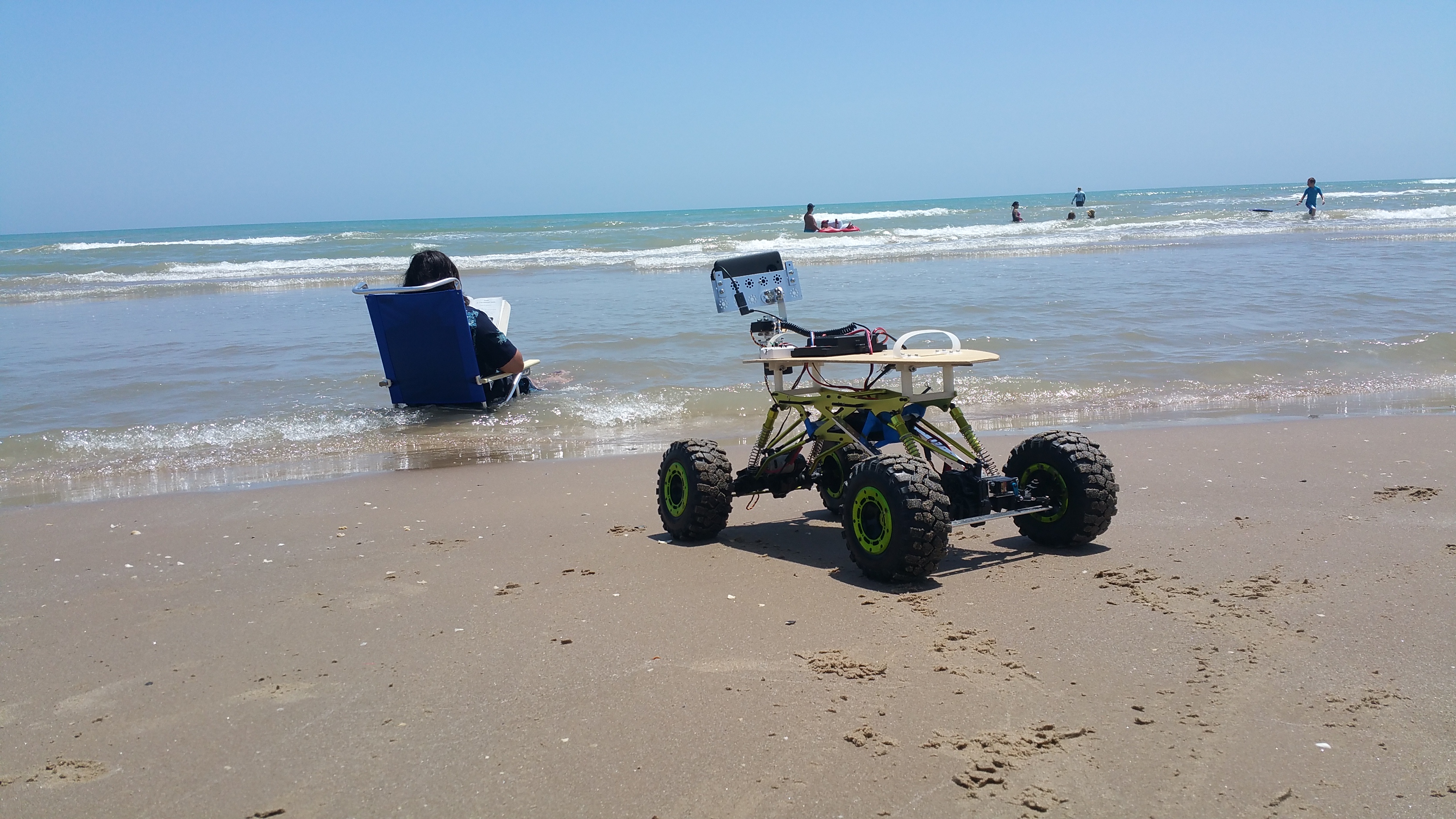 Here is a maintenance fail at the 2017 eclipse

2020 Feb Snowday Had to see how Argos handles the rare snow in Dallas. There is no autonomous going on here - this is just my lousy driving. Open on Youtube for the timeline.

This is our team's build station / tool cart. Since we are lazy, we want it to push itself around. It can track a Vuforia target and follow it around similar to how Argos does it. There is a slight difference in scale.

Unsanctioned Videos - Appearances to the contrary, cartbot is not meant to be ridden by people

That said, here is a progression of learning to ride

Beachcomber is a GPS RTK rover meant to learn about and explore geo-grooming and geo-scribing applications over varied terrain.

Disclaimer: This is my personal project and hasn't involved team members. They aren't taking any credit for this. But since it uses the same control system as FTC robots, there might be some useful tidbits for FTC teams and that's why it's being published here.

Taking in the view on the beach in South Padre

DPRG on a ball field:

6832 Nightlight: progressive time-lapse from a drone about 90ft above the robot

Yup, the real reason I made the Beachcomber learning platform