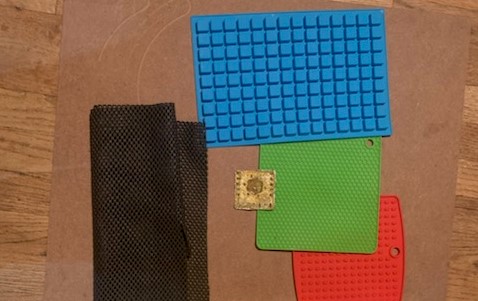 Before our last qualifier, we ran a couple material tests to find the friction coefficient of different materials. Now, since we've upgraded to a new gripper - the Snapdragon - a passive-intake gripper - we will need a newer material with much better grip than the ridged silicone oven-mitt we used for our previous 3-finger gripper. Since our new gripper works by slapping onto a block and clasping it, a better grip material will allow the skystones to latch more easily. As such, we ran a new series of materials tests to find a better material. 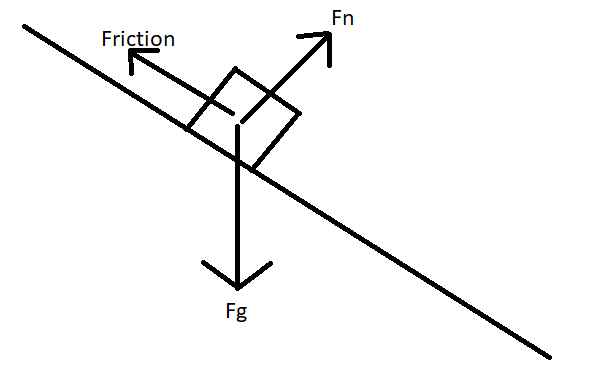 The materials we are testing are a blue ice cube tray, a green oven mitt, a red oven mitt, a black shelving liner, a rubber cement pad, and a plate dipped in Plastidip. Three of these materials we have already tested before, which you can read about in Post 69 of our Engineering Section, but we will still conduct another test on them to keep our values in the new test consistent. The surface we are using is a 24in*24in wooden board. To conduct the tests we put a block on the selected material at the top of the board on its side and its bottom. Then we lifted the board while the block was placed in both positions and measured the height of the top of the board from the ground. We used the average of the heights in both positions to calculate the angle that the board was at using some simple trigonometry seen below. Then we used the friction coefficient equation which you can learn more about here in post 66 of our Engineering Section. 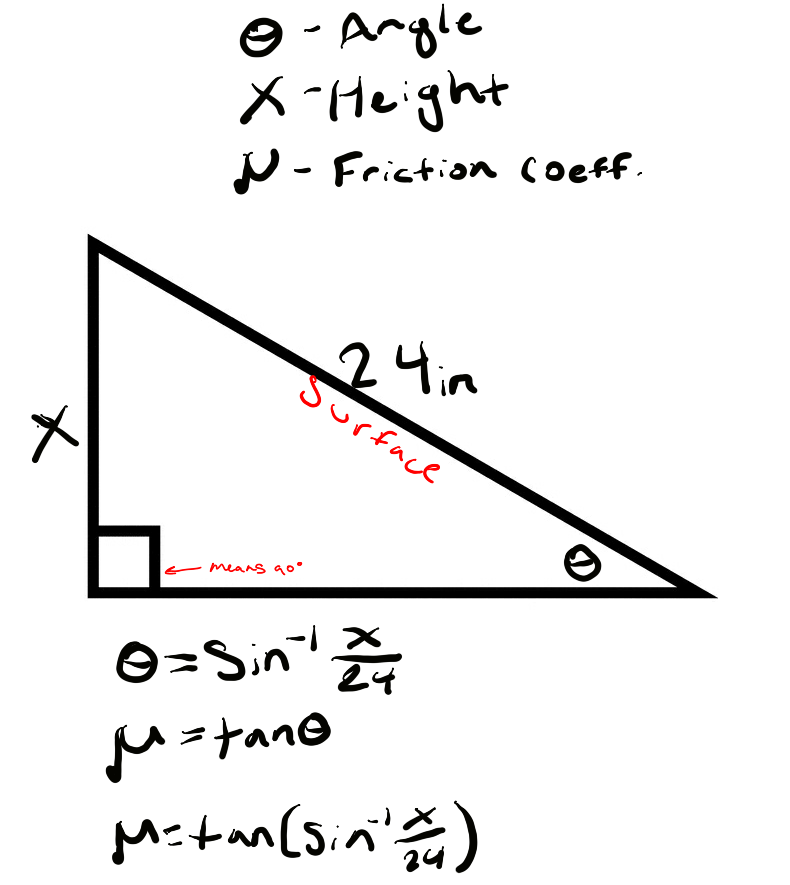 We ran the same tests on the red oven mitt, the material we have on our robot now, and it was raised 12.5 in before the block started to slip which means that the angle was 31.39° and the friction coefficient was 0.61. This makes it an ok material just like the ice cube tray and the other oven mitt. If we were to use these materials, the grip of the robot would be fine; however, the testing of the materials is not about finding an acceptable material, it is about finding the best material.

The rubber cement pad was the most interesting and most effective material. It was made by freeze-drying some rubber cement in a mold. When it was dry it has the friction of a sticky hand. We lifted the board 18 in before the block slipped. That means that we had to lif the board at an angle of 48.59° which means that the friction coefficient was 1.13. The only downside to this material is that it has to be cleaned before match to get the best results out of it. Plastidip. This material was not very good. For one, It does not look very clean because of how clumpy it is. It also only had a height 12 in when the block started to slip, which means that the angle was 30° and the friction coefficient was 0.58.

With these numbers in mind we are now able to decide which material we are going to use on the gripper which is going to be the rubber cement. We also know that for future seasons we can use both the shelf liner and the rubber cement to grab game elements. We are also going to continue to calculate the friction coefficient of different materials so that we can make sure that the Snapdragon gripper is the best it can be. This includes Geko Tape which we might use in the future.