Inspire at Conrad Qualifier By Ethan 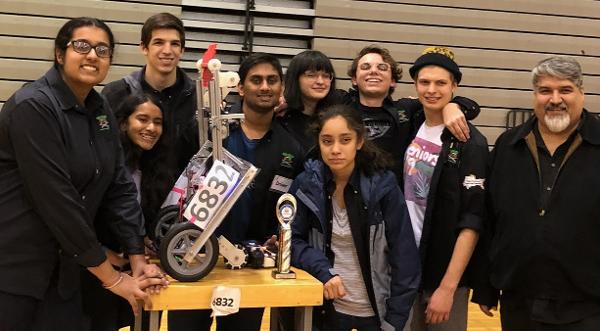 Imperial Robotics was a finalist for the Think Award due to the excellence of their engineering journal. 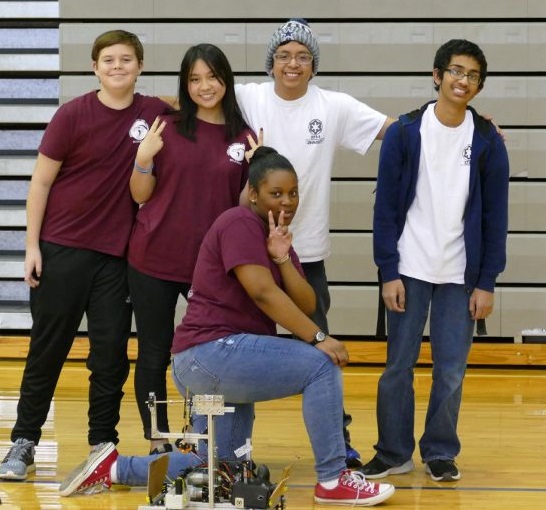 Our two new rookie teams beat back tough odds from a field of seasoned teams. Iron Star became the 4th alliance captain in the playoff rounds. 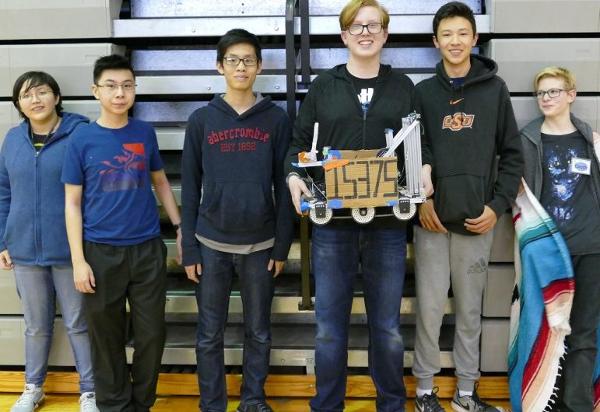 Iron Core was publicly invited to join the 3rd alliance in the playoffs, but graciously declined because they had a new fault in their robot and didn't want to drag the alliance down just to get into the playoffs. This was a highly laudable moment at the tournament and demonstrates the highest level of sportsmanship. FTC is about so much more than the robot, and no team emphasized that more then Iron Core. 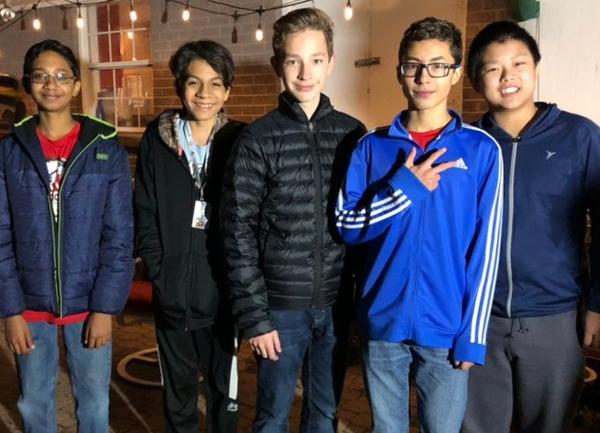 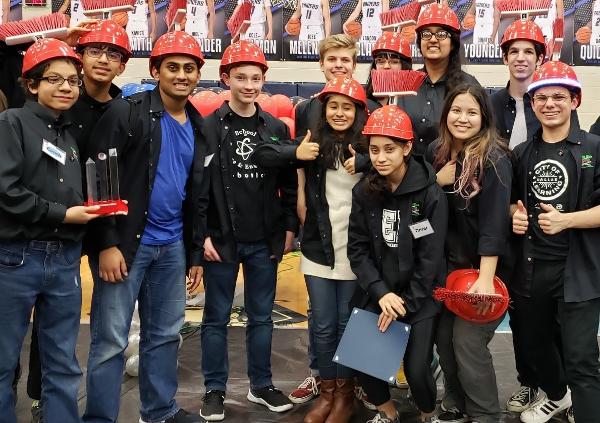 Iron Reign, SEM's varsity team, won 1st place Motivate award and 3rd place Inspire, advancing them to both the State UIL and Worlds Championships in April. The Motivate award recognizes teams who demonstrate exceptional community service, and in this case, was for Iron Reign's continued expansion of the Mobile Learning Lab program. In addition, the Inspire award is given to teams who represent the spirit of the FIRST program: outstanding not only in robot game, but also engineering processes, connecting with professionals, innovative designs and supporting other teams.

Individually, Karina Lara and Justin Bonsell were recognized as FIRST Dean's List Semi-Finalists. Named after FIRST Founder Dean Kamen, inventor of the Segway and the portable dialysis machine, Dean's List students are considered leaders in their community who exemplify the ideals of FIRST while achieving technical excellence. Karina Lara was then announced as one of four Dean's List Finalists who will go on the represent North Texas at the FTC World Championship.

Imperial Robotics, our other veteran team, medaled when they made it to the final round of the Regional Championship through their exceptional robot performance, only losing by a thin margin in the last match. If another advancing team can't go to Worlds, Imperial will be the next team to advance.

All-freshman team Iron Star performed with distinction. Not only did they earn a spot at the Regional Championship as a rookie team, they also demonstrated coolness under stress as they experienced persistent issues with robot disconnections. They never stopped trying to get the robot back online, stayed professional throughout the tournament and gained valuable experience that will help them elevate to veteran teams next year. Members included: Katelyn Cumplido, Shawn Halimman, Evan Branson, Paul Lea, Aaron Daane, Beau Aveton, Cooper Clem, Harish Jai Ganesh, and Benjamin Oommen.

Our thanks go out to all of the people and sponsors who have supported us already this season, including but not limited to: Mr. Schelanko and Mr. Marx and the Dallas ISD STEM Department, Mr. Boykin our faculty sponsor, Mr. Palacios and SEM staff, Ms. Huitt, The Texas Workforce Commission, FIRST in Texas, DEKA, Patrick Michaud - our FIRST FTC Regional Affiliate, Fried Elliott - Regional Judge Advisor, and the Virani / Lux family.


Task: Set up our Worlds pit, complete inspection and judging, and compete in robot game matches 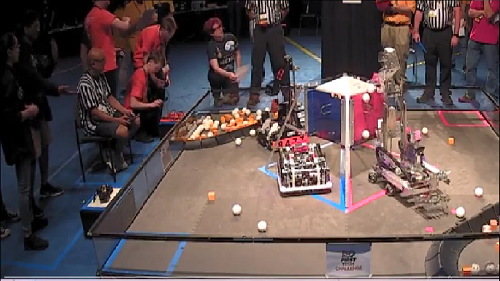 Our presentation went well. We were able to get all of our information across effectively in a shorter amount of time as usual, but this led to more time for questions , which the judges had a lot of. Throughout questioning, we were able to hand off questions so that no individual member dominated the questioning time.

One problem we had with the presentation was that the rooms were constructed within the competition hall with fabric, just like last year. This made it so that sound did not carry very well within the rooms, and that sound could carry over from other rooms, so the judges had difficulty hearing us at some points which was especially worse when we spoke too quickly. Despite this, we're confident that the majority of the information came across.

We lost 290-95. Our poor planning led to the drive team having phones with low batteries and being unable to play in the match and Rhoming Robots were unable to carry us in this 2v1 match. 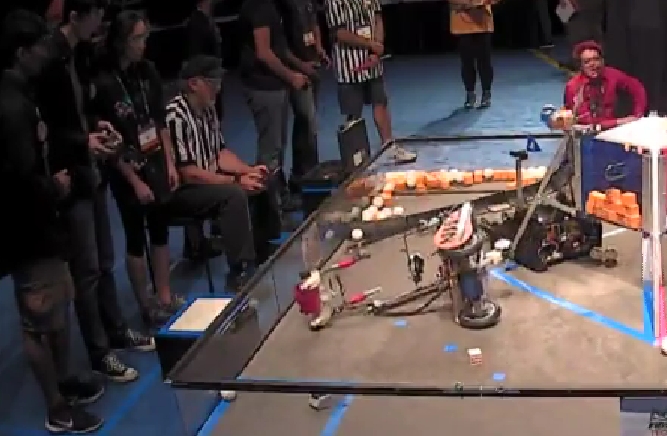 We lost 340-280. We had a flawless auto this time and followed with 9 far crater cycles and a latch. During the first cycle 3 gold minerals were scores at once with resulted in a 50 point penalty. If we had better visibility of the mineral tray this would have been avoided and the win margin would only have been 10 points.

We lost 322-242. Once again we had a complete auto including scoring the sampling mineral. This was followed by 6 far crater cycles but an attempt for a 7th cycle during end game resulted in a tip over for Icarus and neither us nor Masquerade could hang. If both robots would have hung we would have won by a small margin.

We lost 335-217. Due to technical issues Icarus was forced to be hung for about five minutes and this burnt out both elbow motors. This resulted in no autonomous and only about two cycles. We also had no hang and had to park in the crater. If we were allowed to delatch Icarus while the issues were being resolved we would have won by a large margin.

We lost 272-211. In between matches we were able to buy and replace the elbow motors but they had encoder issues which could not be resolved in time, this meant we had to run on only one elbow motor for this match. With this we were able to have a complete auto and 7 near crater cycles. There was no hang this time so we went for the crater instead. If we had both elbow motors functional we could have scored a few more cycles and hung which would have won us the match by a thin margin.

We [finally] won 315-160. At this point we still haven't fixed the encoder issue but we still pulled off a semi-complete auto since the team marker was not dropped and the sampling mineral was not moved enough to count. The cycles this time were mostly unsuccessful but we hung and Batteries Not Included had enough cycles to compensate and we managed to finally win a match. 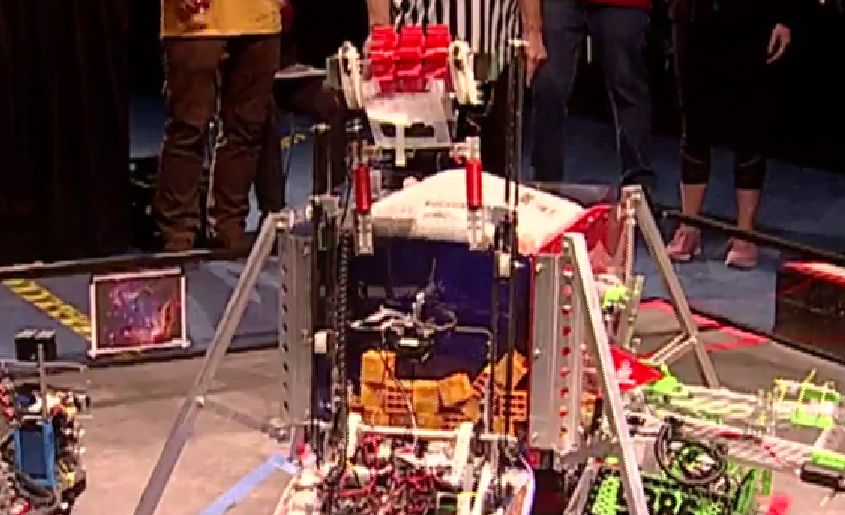 In between matches we took a trip with CartBot to the FLL pits to attract anyone interested in the next stage of FIRST(FTC). We told them they could come by our pit at any time for a in-depth presentation of our robot and about an hour later an FLL team, the Engigears, came to visit our pit. We were able to show them how complex FTC can get and showed them Icarus' capabilities and let some of them drive it around. They had a great experience and we hope they are now informed of FTC and pursue it come 7th grade. 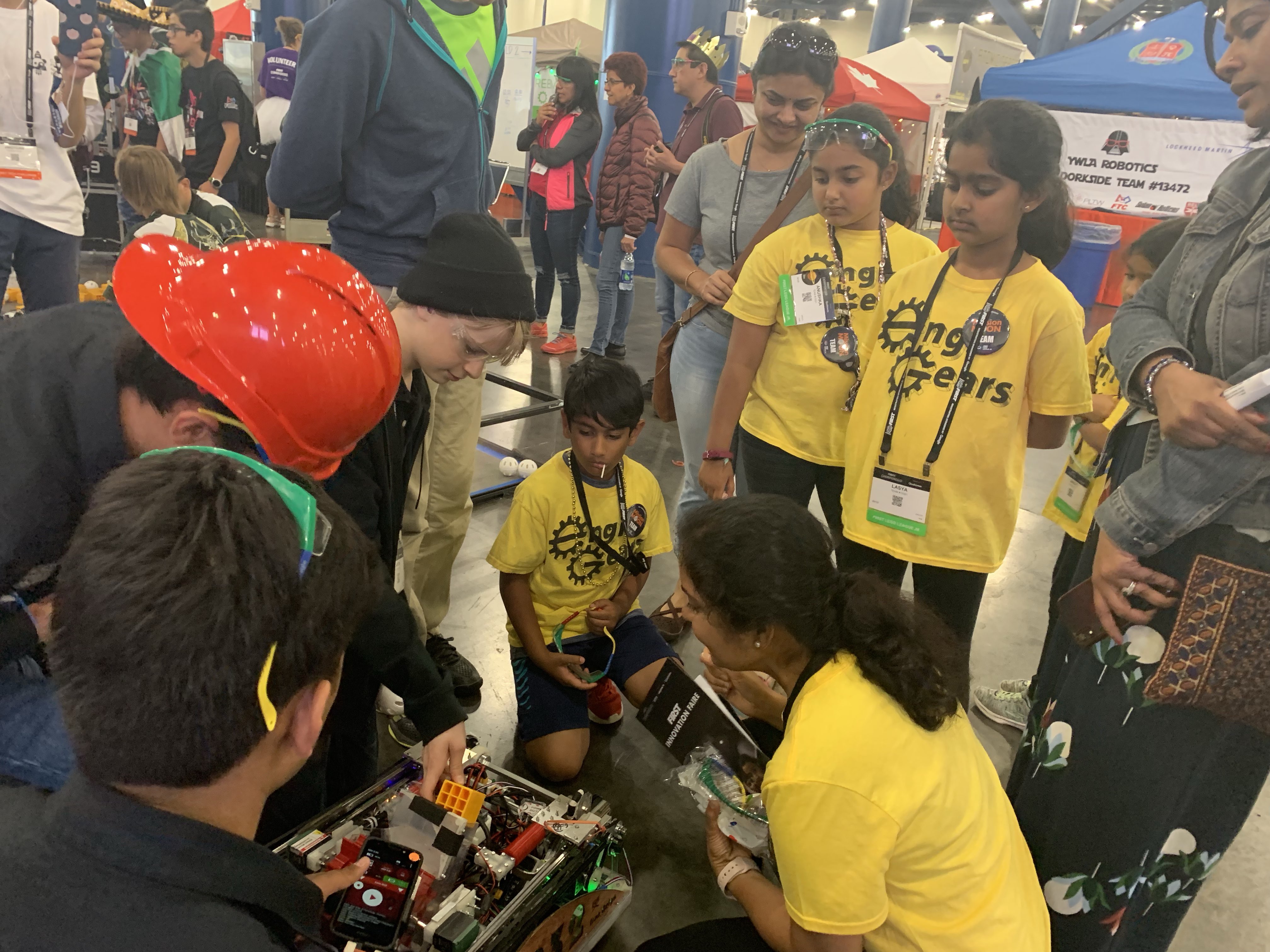 We won 292-280. With the elbow motors fixed we were ready for this match. We had a full auto and 5 successful but hang was not successful and we had to go for the crater again.

We won 240-185. Just as normal we had a complete auto but we were blocked from the crater by Tech Hogs(opponent). Once Tele-op started Icarus was tipped over after bumping into Tech Hogs. Although Icarus is designed to recover from any tip over, a sideways tip is nearly impossible to recover from, however Icarus' chassis was on the crater edge and after about 30 seconds of suspense Icarus recovered and received lots of cheering from the crowd. After this however we got tipped over again by Tech Hogs(whether it was intentional or accidental is yet to decided) and there was no crater edge to save us this time. Despite this RoboEclipse was able to carry the alliance to victory. 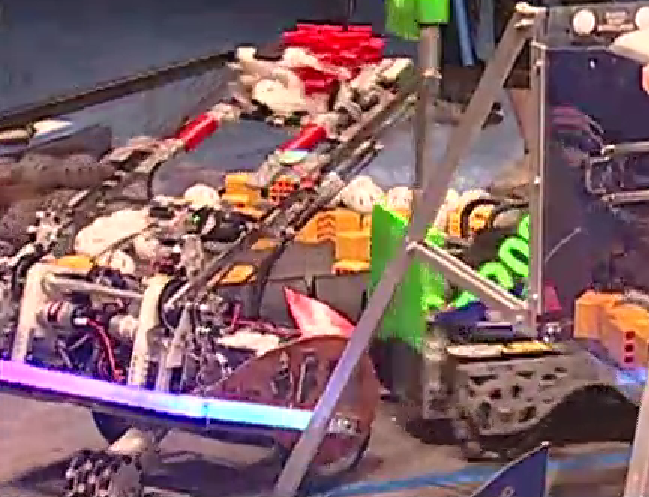 We won 370-108. We again had a full auto this time with a deposit of the sampling mineral. we had 6 successful far crater cycles but on the 7th the deposit articulation on Icarus was initiated too early and it tipped over and 20 seconds was not enough time to recover and hang. Even so, the lead we had was good enough to win us the match.


Task: Participate in Alliance Selection and attend the Award Ceremony

Today was the last of the 2019 FTC World Championship and our first task of the day was to ask top-seeded teams if they thought we would be a good asset to their alliance for the play offs. We intrigued a few with our higher-than-average depot-side cycle time and hoped for the best during alliance selection. Unfortunately our 55th position probably made the alliance captains think again about who to pick.

A while later followed the award ceremony, we went in with high hopes as we have received many pit interviews throughout the week. Our hopes came true as we heard "the finalists for the Collins Aerospace Innovate Award are ... ... team 6832". The whole team burst into happiness and joy as our unique robot design was recognized at the World Championship. We were finalists for the Innovate Award! 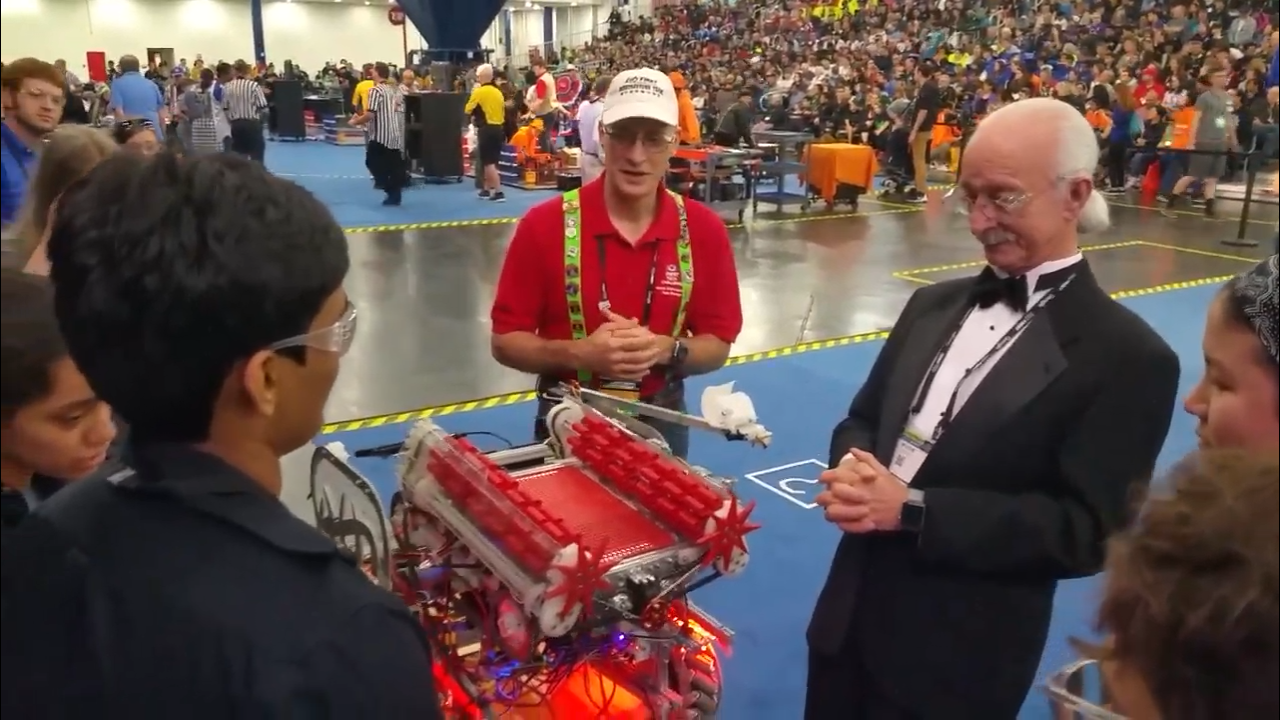 As most people in the FIRST community know by now, Dr. Woodie Flowers passed away on October 11th. As a team who has met Dr. Flowers twice at the FIRST Championship, this saddened us greatly. Dr. Woodie Flowers was an MIT and Louisiana Tech Alumni, college professor, husband and co-founder of FIRST robotics. Launched in 1989, FIRST was created to inspire kids of all ages to find STEM as a fun, engaging and learnable concept. Ever since its founding, Dr. Flowers was an actively-involved member of the organization. He introduced innovative ways to encourage non-STEM motivated kids to the program, and introduced core values to make FIRST an all-inclusive, one-of-a-kind environment. He coined the term "Gracious Professionalism" as a way to persuade everyone to be competitive while also being respectful to themselves and their opponents. Today, FIRST has become a community - one where students of all ages, nationalities, and skill-sets have learned to make robotics and STEM a crucial part of their lives. From creating one of the most popular robotics classes in MIT, to co-founding one of the longest-lasting robotics programs in the world, Dr Woodie Flowers was a man who had dedicated almost his whole life to inspiring the new generation of inventors. His contribution to FIRST is what inspired many teams, including ours, to spend the better part of our schooling towards learning and spreading the influence of robotics to our communities. Rest in peace Dr. Flowers, you will be missed by us all.

Inspire at Allen By Bhanaviya


This weekend, SEM sent four teams to the first qualifying tournament of the FIRST Tech Challenge 2019-2020 season. Iron Reign (6832) was a finalist in robot game and won the top award (Inspire) and has advanced to the Regional Championship in February.

Imperial Robotics (3734), was 8th place in match play, the highest qualification ranking of our 4 teams, and made it into the semifinals playoffs, but was then eliminated in their second semifinals match.

Iron Golem (15375) was 11th in qualifying rounds, and won 3 out of their 5 matches. Their impressive performance at the first tournament for this all rookie team has set them up for a more successful experience at the next qualifier on January 11.

Iron Core (15373), another all rookie team, was 16th in qualifying rounds, and demonstrated coolness under stress as they experienced persistent issues with robot disconnections. They are already hard at work aiming for their next qualifier.

Our thanks go out to all of the people and sponsors who have supported us already this season, including but not limited to: Mr. Schelanko and Mr. Marx and the Dallas ISD STEM Department, Mr. Gray our faculty sponsor, Mr. Palacios and SEM staff, Ms. Huitt, The Texas Workforce Commission, FIRST in Texas, DEKA, Patrick Michaud - our FIRST FTC Regional Affiliate, Fried Elliott - Regional Judge Advisor, and the Virani / Lux family.